Oil could reach as high as US$160 dollars per barrel: Enverus

Oil posted its first weekly loss since Russia invaded Ukraine and sparked one of the most tumultuous periods the market has ever experienced.

Futures in New York declined 5.5 per cent this week, while Brent crude fell 4.6 per cent. The international benchmark settled above US$112 a barrel, more than US$30 off its Monday rally that saw it surge to almost US$140.

Prices violently whipsawed over the five-day period due to a flurry of news including a U.S. ban of Russian crude imports and the U.K.’s gradual phase out of them. Much of the industry is already shunning Russian oil. In the most recent demonstration of its pariah status, there were no buyers in a tender for crude from the country’s Far East. Nuclear talks came to a standstill, prolonging the absence of Iranian barrels in a market desperate for additional supplies.

“Volatility is not going to disappear anytime soon,”said Tariq Zahir, managing member of the global macro program at Tyche Capital Advisors LLC. You can see US$10-US$15 increases at the “blink of an eye” due to a tight market and geopolitical risks. 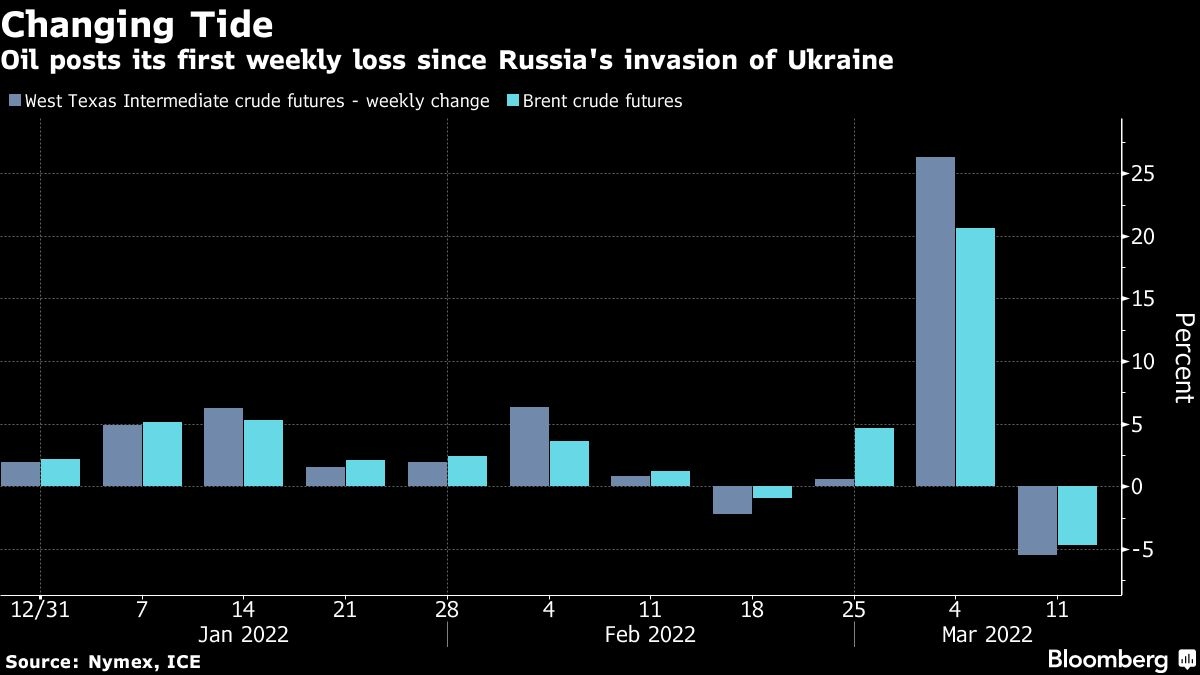 The fallout from the war has rippled through commodity markets from wheat to key fuels such as gasoline and diesel. Increasing inflationary pressure around the world are forcing banks to contemplate a phase of monetary tightening that might choke off the rebound. Rystad Energy AS has predicted Brent could soar to an eye-watering US$240 a barrel this summer if countries continue to sanction Russian oil imports, while Goldman Sachs Group Inc. says that demand destruction is the only way to buffer high prices.

“Extreme intraday volatility perhaps says something about several things: degree of uncertainty, the nature of the news flow, the spillover from some chaotic spot markets and the relatively low liquidity levels at some points,” said Paul Horsnell, head of commodities research at Standard Chartered Plc.

Mounting penalties against Russia have prompted fears that an already tight oil market may be stretched further, due to the absence of the country’s 5 million barrels of oil exports. However, OPEC has stressed there’s no shortage, continuing its output hike of 400,000 barrels a day.

Open interest in the main oil futures contracts has plunged to a six-year low in recent days as traders retreat from risk. Volatility has rocketed, and exchanges have boosted margins, effectively raising the cost of buying and selling. Brent traded as high as US$139.13 a barrel this week, and as low as US$105.60.

The United Arab Emirates on Wednesday called on OPEC+ to boost output faster, though the nation’s energy minister appeared to later temper that message. The cartel, which counts Russia as a key member, has so far resisted calls from consumers to pump more, arguing that the surge in prices is driven by geopolitical tensions rather than a supply shortage.