Room to spare on some Canadian pipelines

Canada’s oil-sands producers are taking their time at restoring production, leaving the country’s normally congested pipelines with room to spare.

Enbridge Inc. said Monday that nominations to ship heavy oil on its Mainline, the country’s biggest oil-export network, exceeded capacity by seven per cent in August versus three per cent in July. For the sixth straight month, no rationing was imposed for light oil shipments. The situation is a far cry from before the pandemic, when apportionment levels consistently exceeded 40 per cent or higher even with provincially imposed production limits.

Canadian oil sands companies have been gradually ramping up output as refinery demand recovers from the COVID-19 pandemic, which prompted mass closures of businesses earlier in the year. But the recovery has been slower than in the U.S. 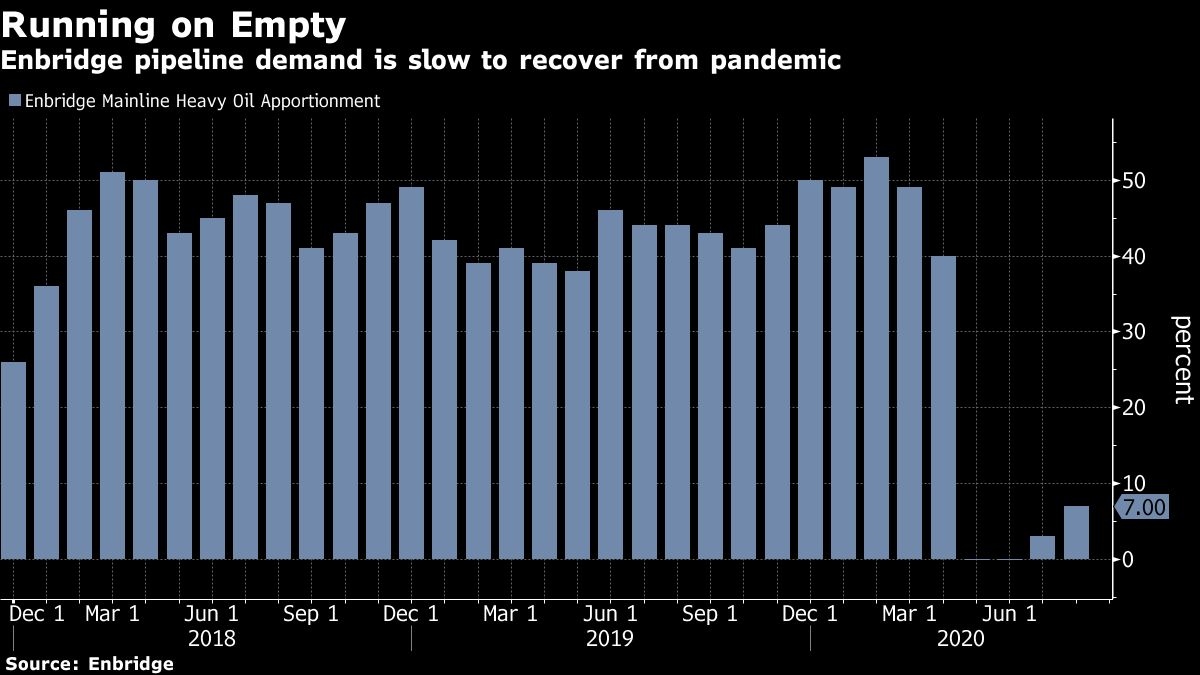 With West Texas Intermediate trading around US$40 a barrel, margins aren’t that appealing, Mark Oberstoetter, lead analyst for upstream research at Wood Mackenzie Ltd. in Calgary, said by phone.

“At this price, their plans to bring back production are economically viable, but it’s not like they are going to rush,” he said by phone.

While companies such as Husky Energy Inc. and Cenovus Energy Inc. are restoring roughly 20 per cent of the million barrels a day of production that was taken off earlier in the year, some companies are still shutting down equipment for maintenance. Canadian Natural Resources Ltd.’s Albian mine, as well as the Scotford upgrader, are undergoing work through next month and maintenance is planned in September on the Horizon and Husky’s Lloydminster upgraders.

The shutdowns have drained Western Canadian oil inventories, which were “on the low side” at the end of June, falling to 28.6 million barrels, according to Genscape.