After years in the shadow of the U.S. shale boom, the Canadian oil sands are emerging from 2020’s historic market crash with a slew of upbeat outlooks from Wall Street equity analysts.

Morgan Stanley and Goldman Sachs Group Inc. are the latest firms to point out the industry’s ability to generate healthy cash flow next year as a reason to buy stocks like Suncor Energy Inc., Canadian Natural Resources Ltd. and MEG Energy Corp. That follows similar reports from BofA Securities and BMO Capital Markets.

Among tailwinds improving the prospects for the beleaguered heavy-crude producers of northern Alberta are declining competition from Mexico and the start of construction of three pipelines, following years of insufficient shipping capacity. Prime Minister Justin Trudeau’s decision last week to narrow the scope of Canada’s new Clean Fuel Standard, by including liquid fossil fuels but leaving out solid and gaseous fuels, is also seen as a positive for the sector. 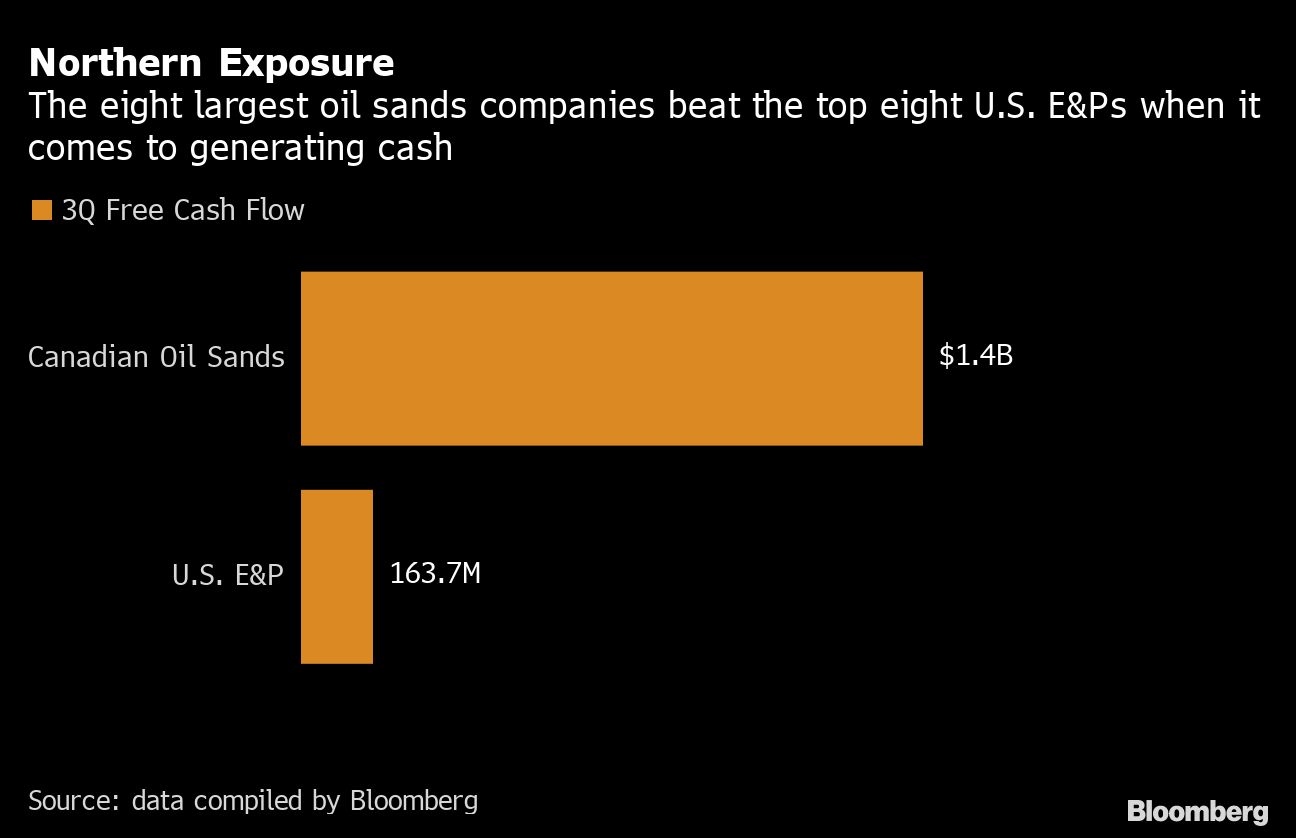 Steady output from their mines means that oil sands producers are able to keep revenue coming for decades without too much investment, while the short life span of shale wells forces U.S. explorers to constantly burn cash just to keep up production.

The eight largest oil-sands producers by market value posted a combined free cash flow of US$1.4 billion for the third quarter, compared with $163.7 million from the top eight U.S. exploration and production companies, according to data compiled by Bloomberg.

Exports of Mexico’s flagship Maya heavy crude grade are forecast to decline by 70 per cent in the next three years, helping narrow Western Canadian Select oil’s discount to New York-traded futures to US$5 to US$7 a barrel next year, BMO Capital Markets said in October. The price gap is currently at about US$12 a barrel.

Demand for WCS has also risen after OPEC countries cut output of their heavier, higher-sulfur grades similar to those from the oil sands. Canadian oil will continue to be “well supported” in 2021, according to Goldman.

To be sure, oil sands companies also face potential headwinds. Increasing numbers of banks and investors have shunned the industry because concerns over high carbon emissions. The pipelines that are under construction still face potential court delays, as well as political opposition.

Adam Waterous, chief executive officer of Calgary-based private equity firm WEF GP, is among investors expecting more profitability from the oil sands than shale. He estimates U.S. crude production will fall by about 2.5 million barrels a day in the next year as oil prices are still too low to earn attractive returns.

“The best days of the U.S. oil industry are definitely behind us,” he said. “We are very bullish on Canadian oil sands where others are not.”

--With assistance from Danielle Bochove