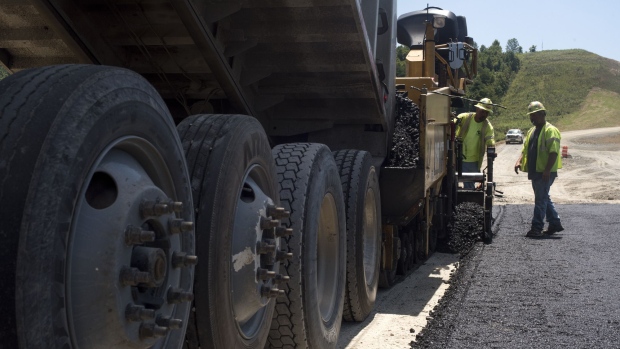 (Bloomberg) -- President Joe Biden, who made clean energy a core tenet of his campaign, plans to set off one more oil-sector boom before shadows descend on fossil fuels.

In a $2.25 trillion infrastructure proposal unveiled Wednesday, Biden earmarked $115 billion for roads and bridges, and another $16 billion to put laid-off oilfield laborers to work plugging abandoned wells across the nation. Those are in addition to sweeping investments in electric vehicles and renewable power, sectors more in keeping with the administration’s green tinge.

The biggest benefit for oil explorers and refiners would come from the expected jump in demand for asphalt to repair crumbling highways and pave new ones. Because asphalt is derived from the heaviest and most-dense material in a barrel of crude, Canada’s oil-sands producers may be the biggest winners, given their status as the source of some of the globe’s thickest petroleum.

Plugging old wells and securing defunct coal mines -- some of which have been abandoned for more than a century in places like Pennsylvania --would mean paychecks for workers thrown out of high-paying jobs during the back-to-back oil busts that kicked off in 2014. Although details remain scant on how the broad-brush plan will be implemented, the oft-opposing forces of fossil fuels and environmentalism lauded many of the measures laid out in Biden’s plan.

“It’s absolutely historic,” Collin O’Mara, president of the National Wildlife Foundation, said of the plan to address abandoned wells and mines. “We realize that by working together we actually share more common goals than have been previously understood.”

The lobbying group that represents more than 700 oilfield service and equipment makers was also pleased with the initial scope of the plan to put hired hands of the shale patch back to work again.

“There are plenty of companies that would really want to engage on this,” said Tim Tarpley, senior vice president for government affairs at the Energy Workforce & Technology Council. “I do think it would be an economic help; how big of a help that’s going to be is going to depend on the details that we unfortunately don’t have yet.”

North American oil explorers are still recovering from last year’s historic crude crash and pledging to restrain production growth for the sake of investor-friendly measures such as dividends. Home to the world’s third-biggest oil workforce, the U.S. saw an 11% cut to headcount in 2020 that reduced the ranks of employed to just under 1 million, according to Rystad Energy. Another 10,000 or so job cuts are expected this year, the energy-data provider has forecast.

Canada’s oil-sands industry was among the hardest hit sections of the industry when Covid-19 and a worldwide glut of crude crashed prices last year. Now, assuming some or all of Biden’s wish list is granted, heavy crude from Western Canada may be poised for a rebound.

“The asphalt industry should be elated with Biden’s plan to upgrade 20,000 miles of roads in the U.S.,” said Charles Kemp, a senior consultant at Baker & O’Brien Inc. “However, this announcement favors heavier oil production from outside of the U.S., which contains roughly double the amount of asphalt versus the asphalt content in light crudes from U.S. domestic production.”

Still, Biden’s plan may not translate into higher profits for oil companies, given that the flip side of the spending plan includes corporate tax increases to fund all the new work.

“The well-capping support is great for well-servicing companies and will add jobs,” James West, an analyst at Evercore ISI, said in an email. “However, the corporate tax hike adds another burden to the U.S. oil industry which probably overwhelms the good news.”

”We’re a long way away from the market trying to price in” the ramifications of the infrastructure plan, said Rob Haworth, senior investment strategist at U.S. Bank Wealth Management. “Typically, infrastructure spending happens over eight to 10 years, so it’s going to take a long time for that to get into implementation, much less priced into the market.”