Oil climbed more than 5 per cent in its biggest rally since July as potential OPEC+ output cuts heighten fears of supply tightness on the horizon.

West Texas Intermediate rose to near US$84 a barrel on news that the Organization of Petroleum Exporting Countries and its allies may scale back production by more than one million barrels a day, its largest reduction since the pandemic. A final decision won’t be made until ministers gather in Vienna on Wednesday.

“It’s surprising for the market to have OPEC talking about cuts of a million barrels a day with inventories really still quite tight and the fact that they’ve also been missing their own production targets,” said Rob Haworth, senior investment strategist at U.S. Bank Wealth Management. “But that said, we’ve had prices slump now from over US$120 to US$80, so I’m sure they’re looking at that as a challenge.”

With potential recessions and lower seasonal demand heading into the winter, “there’s not a great forward scenario, so the cuts themselves make some sense given how the data’s lining up,” he added. 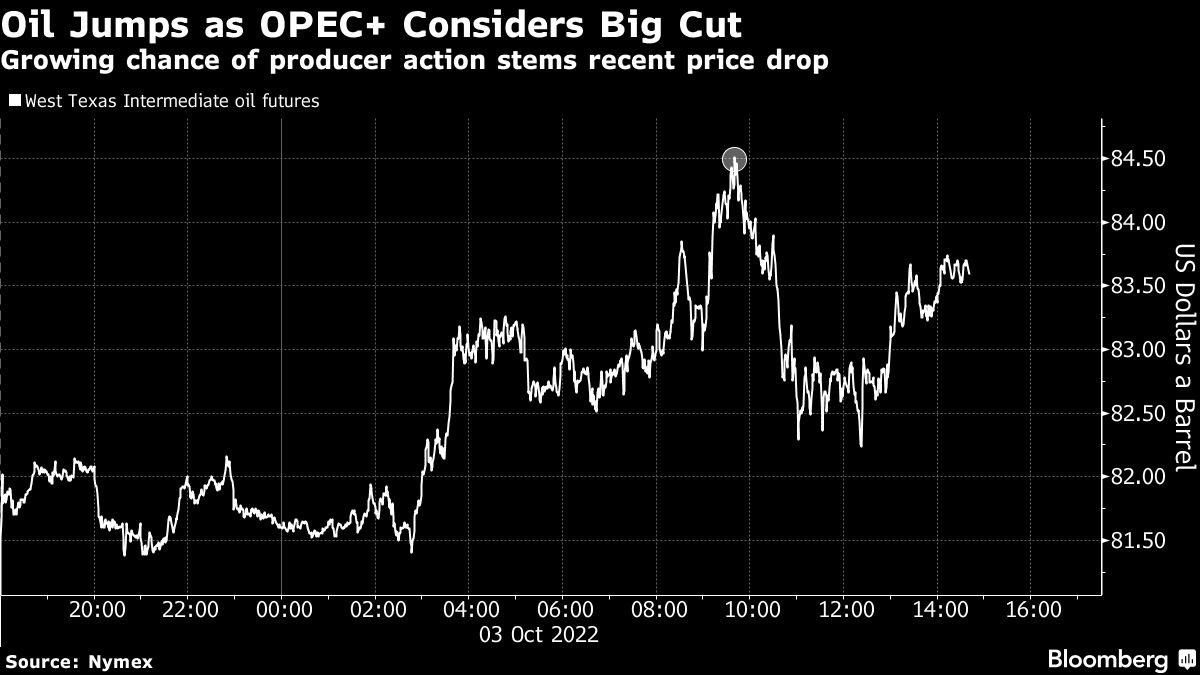 Oil fell by a quarter in the three months through September as a slowing global economy sapped demand. Banks, including UBS Group AG and JPMorgan Chase & Co., said OPEC and its allies may need to trim output by at least 500,000 barrels a day to stabilize prices. Goldman Sachs said a reduction of more than one million barrels a day could bring investors back into the market.

This week’s OPEC+ meeting will be the first in-person gathering since March 2020. The group is deciding on supply for November.

Some OPEC+ members are producing below their production quotas, potentially dulling the impact of a supply cut. Still, the potential for further supply tightness amid already low inventories is supporting prices.

A large output cut may draw criticism from the U.S. and other major consumers, where energy-driven inflation has forced central banks to aggressively jack up interest rates. There also is the specter of European sanctions on Russian oil that are due to take effect in December.

The European Union is aiming for a preliminary deal as soon as Monday for a package designed to punish Russia for its war in Ukraine. The agreement likely would include political backing for imposing a price cap on Russian oil.