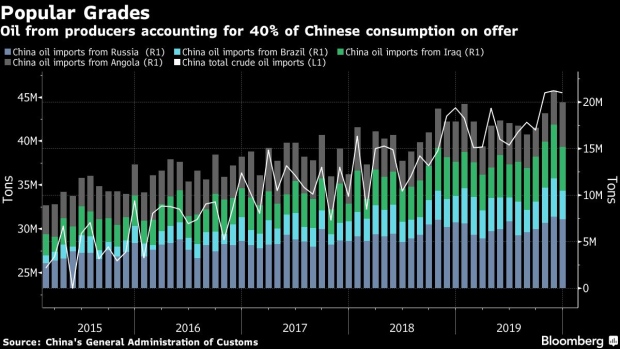 (Bloomberg) -- Oil sellers are looking for alternative buyers in Asia for prompt cargoes as Chinese demand dries up because of the coronavirus and some customers ask to defer purchases.

The suppliers -- including oil majors and trading houses -- are offering grades including Russia’s ESPO, Basrah Light from Iraq and Brazilian Lula for delivery in just a few weeks time, according to traders in Asia with knowledge of the matter. This is unusual because the cargoes would typically have traded several weeks ago and already be en route to their destinations.

The offers are another sign of the impact the deadly virus is having on commodity trade flows, as measures to contain the epidemic weigh on economic activity, travel and energy consumption. China’s oil demand has dropped by about 3 million barrels a day, or 20% of total consumption, prompting refineries to scale back production as their storage tanks fill up.

Some buyers -- particularly independent refiners known as teapots -- are requesting sellers defer or cancel their deliveries. That’s leaving vendors having to quickly find alternative customers while others may simply be looking to offload as much as they can now, according to the traders, who asked not to be identified because they’re not authorized to speak publicly.

While there are a lot of prompt offers for spot supplies, traders said buying interest was muted across Asia as weak refining margins eroded optimism across most of the region.

Crude prices have fallen about 11% since just before China’s Lunar New Year holidays as the rising death toll and infections from the virus prompted authorities to lock down swathes of the country and restrict travel.

The Asian oil traders said ESPO was being offered at about $5 a barrel or more above the Dubai oil benchmark price. That compares with premiums as high as $6 to $7 for transactions of the same grade in mid-January. The cargoes could be sold at lower premiums given how prompt they are, one of the traders said.

ESPO is a firm favorite among Chinese refiners due to its high distillate yield, easy-to-manage cargo size and close geographic proximity. However, the short distance from Kozmino port in eastern Russia to China could be a disadvantage in this case as sellers may find their cargoes stranded and distressed if a buyer isn’t found soon after loading.

India is shaping up as a potential bright spot, however, as the nation’s refiners are more geared toward domestic consumption and less exposed to wider demand trends.

“We have been aggressively looking for Angolan and Brazilian crudes, and this situation in China throws up a good opportunity,” said R. Ramachandran, director of refineries at Bharat Petroleum Corp. “We are very hopeful that some of these cargoes would come to our radar when we go for spot purchases.”

To contact the editors responsible for this story: Serene Cheong at scheong20@bloomberg.net, Alexander Kwiatkowski, Andrew Janes