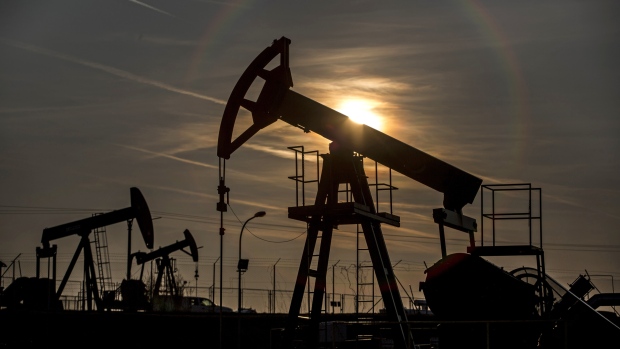 The sun sets beyond oil pumping units, also known as nodding donkeys or pump jacks, at an oil plant operated by MND AS in Uhrice, Czech Republic, on Monday, March 23, 2015. , Bloomberg

(Bloomberg) -- The oil services sector will contract in 2020 as producers cut spending in response to lower crude prices, ending three years of growth, according to Rystad Energy.

The market will shrink 4% to $621 billion next year from $647 billion in 2019, the research company said Wednesday in a statement.

The outlook is based on a Brent oil price of $60 a barrel, close to where it’s currently trading. That’s in “stark contrast” to Rystad’s previous view, which based on an estimate for about $70 oil in 2020 and saw services expanding 2%, said Audun Martinsen, its head of oilfield services research.

Oil prices are down this year amid a persistent supply glut and concerns about global demand. That’s put further pressure in particular on U.S. shale producers, many of whom are cutting costs. Rystad said the worst of the looming recession in services will be in shale, which is expected to see a 6% decline in spending.

Other onshore activity will fall 5% and offshore will drop 1%, the company added. Subsea spending will rise because of an existing backlog. Rystad sees overall spending growth resuming in 2021.

To contact the reporter on this story: Simon Casey in New York at scasey4@bloomberg.net

To contact the editors responsible for this story: Simon Casey at scasey4@bloomberg.net, Christine Buurma