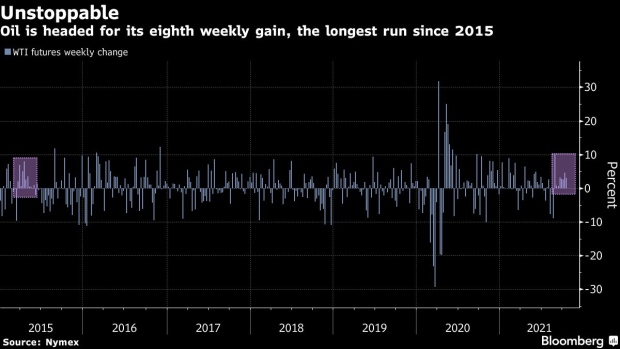 An oil pumping jack, also known as a "nodding donkey", in an oilfield near Neftekamsk, in the Republic of Bashkortostan, Russia, on Thursday, Nov. 19, 2020. The flaring coronavirus outbreak will be a key issue for OPEC+ when it meets at the end of the month to decide on whether to delay a planned easing of cuts early next year. , Bloomberg

(Bloomberg) -- Oil headed for an eighth weekly gain, the longest such run since 2015, as a global energy crunch tightened the crude market.

Futures in New York rose above $82 a barrel, while Brent was close to topping $85 for the first time since 2018. The energy squeeze triggered an unusually large draw in crude stockpiles for this time of the year at the U.S. storage hub of Cushing, government data show. Shortages of natural gas in Europe and Asia are boosting demand for oil products, the International Energy Agency said.

Crude has rallied to the highest since 2014 as the energy crunch coincided with rebounding demand as major economies open up after the pandemic. Saudi Arabia’s energy minister reiterated the need for OPEC and its allies to take a gradual, phased approach to restoring supply hikes even as banks including Citigroup Inc. raised their price forecasts due to fuel switching.

The U.S. is engaged in diplomacy with OPEC+ members over energy supply and is “expressing in private our concerns,” State Department Spokesman Ned Price said on Thursday. U.S. natural gas prices have more than doubled this year, with the peak winter demand season still weeks away.

“There is a bit of exuberance right now,” said Howie Lee, an economist at Oversea-Chinese Banking Corp. “If prices continue to go higher toward $90, there may be some reconsideration on part of OPEC on increasing output.”