Oil should break out above US$70 by the summer: Market strategist

Oil posted the biggest weekly gain since early March as signs emerged of a recovery from the pandemic gaining traction in the U.S. and China.

Futures in New York advanced 6.4 per cent this week, despite eking out a small loss on Friday. On the heels of robust economic figures out of the U.S., data from China showed its gross domestic product climbed 18.3 per cent in the first quarter from a year prior as consumer spending beat forecasts. In March, China’s refiners processed about 20 per cent more crude than a year earlier, pointing to the strength of the country’s rebound.

JPMorgan Chase & Co. analysts brought forward their forecast for the global benchmark Brent hitting US$70 a barrel again by four months to May, with a boost in U.S. demand likely bringing inventories for countries of the Organization for Economic Co-operation and Development in line sooner than expected.

“The world’s two largest economies are starting to really shine, and despite difficulties in Europe, they’re starting to get vaccinations going as well,” said Edward Moya, senior market analyst at Oanda Corp. “Having Europe, China and the U.S. for the most part looking at a return to normalcy, that speaks wonders for the demand outlook, which is very supportive for higher prices.” 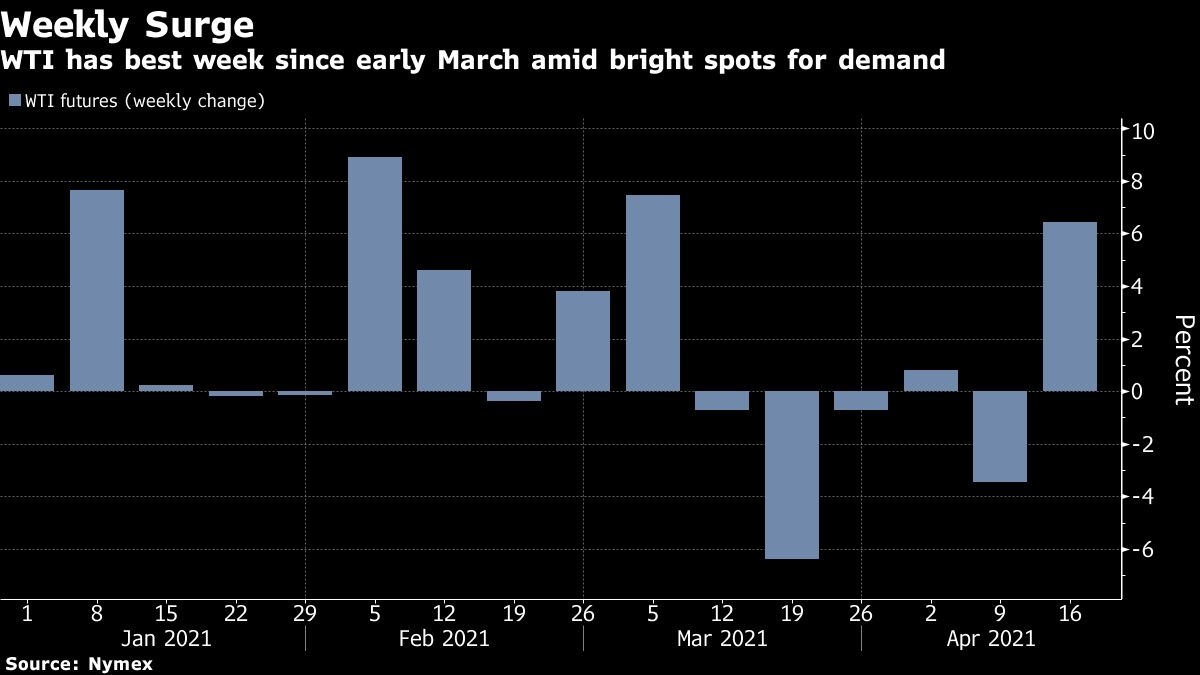 Prices this week escaped the narrow trading range they had been in for nearly a month, with upbeat developments out of the world’s two largest economies helping lift the outlook for demand. The International Energy Agency joined the world’s major oil organizations in boosting its consumption forecasts earlier this week, with the IEA citing the improving situation in U.S. and China.

In Asia, a Chinese mega-refiner and some Japanese oil companies have been snapping up crude cargoes, boding well for the physical market. With Asian buying picking up, gauges of market strength have also climbed. Brent’s nearest timespread was in a bullish backwardation of 48 cents a barrel on Friday, compared with as little as 37 cents on Wednesday.

“We’re closing the gap on gasoline and jet fuel,” said Peter McNally, global head for industrials, materials and energy at Third Bridge. “International travel is not coming back this summer, but as far as the two biggest markets go -- China and the U.S. -- it’s encouraging.”

Commodities faced a broad-based surge this week, with oil and metals both topping key technical levels alongside a weaker dollar and lower U.S. Treasury yields. The 23-member Bloomberg Commodity Spot Index broke out to the highest since late February after hedge funds trimmed their net bullish positions for six straight weeks.

While the oil market is facing an increase in supply in the coming months, although the Organization of Petroleum Exporting Countries said this week that rising demand should allow for global stockpiles to deplete. Exports of Russia’s flagship Urals crude are set to rise sharply in the first five days of May, a move that pressured swap markets tied to the grade.

Complicating the picture, talks are continuing between Iran and world powers over the revival of a 2015 nuclear agreement, a return to which could see the U.S. lift sanctions on the Persian Gulf nation’s oil exports. Still, progress on the talks has been uncertain in recent days.

Despite strong recovery signals from China and the U.S., COVID-19 continues to slow growth elsewhere. In India, refineries are diverting oxygen produced at their plants to hospitals to help battle a serious second wave, which has led to fuel sales tumbling during the first half of April compared with a month earlier.