Generalists don’t understand this is the tightest oil market in decades: Eric Nuttall

Oil marked its first monthly decline since November as OPEC+ completed the return of output it halted during the pandemic and signs emerged that the US economy was on weaker footing than expected.

West Texas Intermediate dropped below US$106 a barrel on Thursday, posting a monthly decline of 7.8 per cent. OPEC+ rubber-stamped an increase in supply for August, but focus is turning to how much those members with spare production capacity will pump once the current agreement ends. President Joe Biden said he’ll request more output at the Gulf Cooperation Council forum next month rather than ask Saudi Arabia directly.

Prices were also pressured Thursday after a report showed US consumer spending fell in May for the first time this year and prior months were revised lower.

“A raft of US data all drove home the point that recession risks continue to grow” said Ed Moya, senior market analyst at Oanda. “The demand outlook might be deteriorating as gasoline usage has disappointed” with retail prices hovering near record highs. 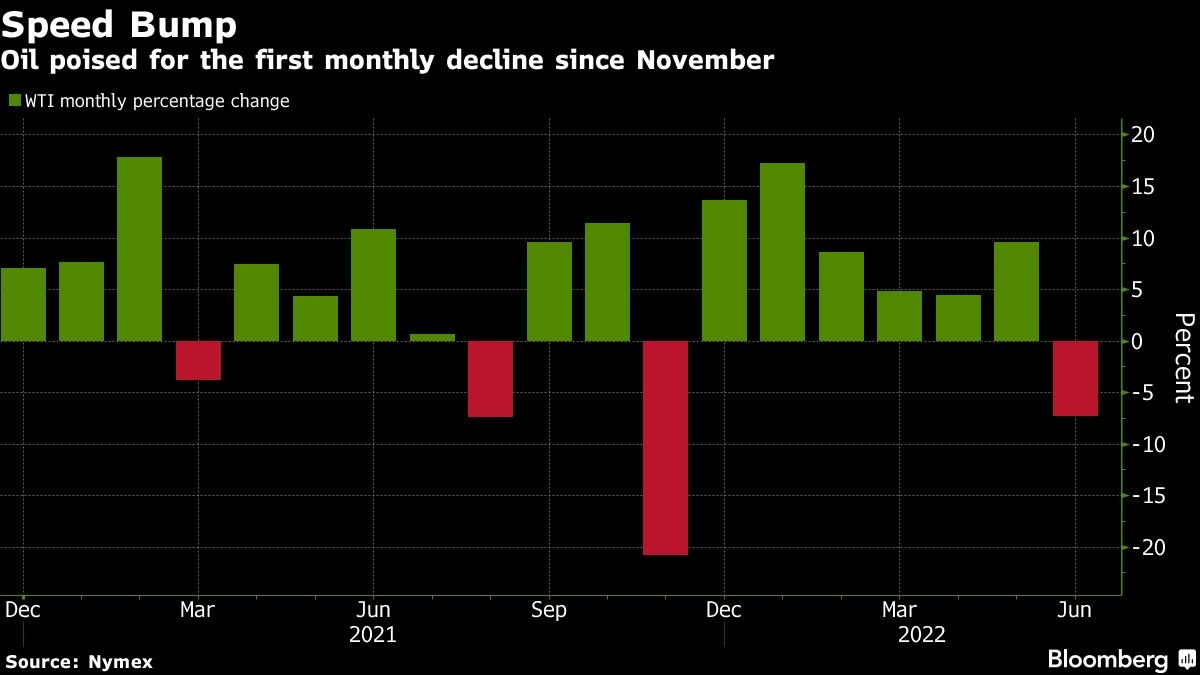 US gasoline demand is showing signs of softening just three weeks into the peak driving season. This comes after retail gasoline prices hit national record highs earlier in the month. The data were published a day after a report showed fewer Americans are planning road trips this summer as gas prices soar.

Demand has stalled since the beginning of the year, when we were having a higher rate of demand growth, Ed Morse, Citigroup’s global head of commodity research, said in a Bloomberg TV interview. “And it’s stalling out in the rest of the world because of high prices.”

Soaring gasoline prices have become a political problem for Biden, who has lobbied OPEC+ to increase output while also tapping into the strategic reserve to supplement the tight physical market. In his upcoming visit to Saudi Arabia, Biden said, he will ask American allies in the Persian Gulf region to increase production instead of asking Crown Prince Mohammed Bin Salman directly to boost energy output directly at the July 16 meeting.

Even as futures have come off in recent days leading to the first monthly decline this year, premiums for more promptly available physical barrels are fetching enormous premiums amid outages from Libya to Ecuador.

Oil is still about 45 per cent higher this year as the global economic recovery coincided with upended trade flows from Russia after its invasion of Ukraine in late February. US crude inventories at the key storage hub at Cushing, Oklahoma, have reached critically low levels as refineries produce as much fuel as possible, while the pull for barrels from overseas remains strong.