Oil posted a fifth straight weekly gain to close at the highest since early March on continued signs of tight fuel inventories as Americans head into summer driving season.

West Texas Intermediate settled above US$115 after trading in a volatile session ahead of the Memorial Day holiday. Drivers are facing soaring costs heading into the peak holiday driving period with gasoline stockpiles at the lowest seasonal level since 2014. New York gasoline futures settled above US$4 a gallon first the first time since March 16.

Fuel markets have tightened globally following Russia’s Ukraine invasion in late February, which has upended trade flows and fanned inflation. The Biden administration is reaching out to oil companies to inquire about shuttered refineries, according to a person familiar with the matter.

“If supply does not recover, oil demand may have to ease,” Bank of America analysts led by Francisco Blanch wrote in a report, saying that Brent futures could soar to US$150 a barrel. 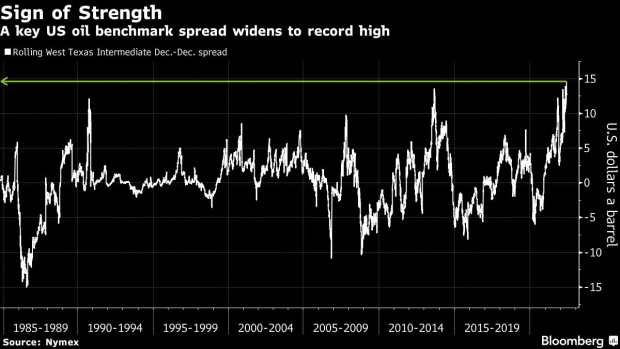 Oil has advanced during the past four weeks, bringing this year’s gains to more than 50 per cent, and many analysts believe the immediate outlook remains bullish. Markets also remain in backwardation, with near-term prices trading above longer-dated ones.

“WTI timespreads have rallied to reflect the risk of tank bottoms at Cushing and the need to keep more barrels at home,” said Livia Gallarati, senior oil analyst at Energy Aspects. The December-December spread, a gauge used by traders to bet on the health of the market, touched a fresh record high on Friday.

Meanwhile, the Group of Seven urged OPEC to pump more oil as the cartel and its allies, which have rebuffed calls to open the taps, prepare to meet next week. Bank of America Corp. warned that a loss of Russian exports following the invasion of Ukraine “could trigger a full-blown ‘80s-style oil crisis.”

Upside has been capped by a virus resurgence in China, which continues to weigh on the outlook for demand as the world’s biggest crude importer sticks with its COVID Zero strategy.

China may issue state refiners additional fuel-export quotas to clear high inventories that have swelled during lockdowns, according to people familiar with the matter. Volumes and timing remain unclear at this stage, although industry consultant JLC said recently it could total 3.5 million tons.