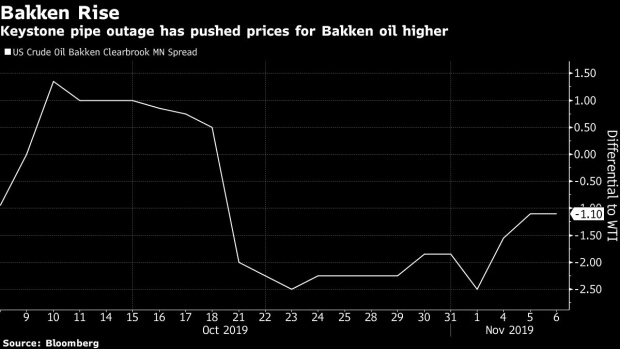 (Bloomberg) -- The shutdown of one of Canada’s largest crude pipelines has shippers turning to rail to move their oil.

Demand to transport crude by rail has picked up over the past week as TC Energy Corp. works to return its Keystone crude pipeline to service following a leak, according to people familiar with the matter. The line shut last week after it ruptured in Walsh County, North Dakota, and spilled more than 9,000 barrels.

Shipping crude by rail has become more economical as the shutdown traps barrels in Alberta, depressing prices there, while boosting values in the Midwest and along the U.S. Gulf Coast, where refiners have to seek alternatives. The system carries crude from Hardisty, Alberta, to Steele City, Nebraska, from where it extends toward the biggest U.S. supply hub of Cushing, Oklahoma, and to Patoka, Illinois.

“We are expecting crude-by-rail volumes into the south to rise as the Keystone outage has caused Alberta oil prices to decline, and with the province set to grant waivers to production that is shipped by rail from Canada,” said Stephen Wolfe, an oil analyst at Energy Aspects Ltd.

Refiners have been seeking grades such as North Dakota’s Bakken for late-November or December delivery via train to replace light Canadian grades that would have been delivered via Keystone, the people said, asking not to be identified because the information isn’t public. That has narrowed the discount for Bakken at Clearbrook, Minnesota, versus New York-traded crude futures by about half since the pipeline shut.

The refiners are also seeking Canadian heavy crudes that could be delivered by rail, said one of the people.

Inventories are building in western Canada, where stocks rose nearly 5 million barrels last week, people familiar with Genscape data said. That has weakened prices for Alberta oil enough to make rail shipments to the U.S. Gulf and into Cushing viable. Western Canadian Select in Hardisty is about $18 a barrel cheaper than in Houston, more than the typical $12 cost to ship it by rail.

Alberta’s government-imposed production limits, implemented at the start of the year, caused Canadian crude prices to strengthen so much that shipping by rail was rendered uneconomic, curbing exports. Last week, Alberta announced that oil companies could produce above their limits if they shipped the oil out by rail as a means of stimulating more crude-by-rail exports.

There appears to be available capacity for more shipments by rail. The province’s rail companies have the capacity to raise exports by 200,000 to 300,000 barrels a day, Mark Little, Suncor Energy Inc.’s chief executive, told reporters at conference in Calgary Tuesday. That compares to 310,000 barrels a day exported in August, according to the Canada Energy Regulator.

To contact the reporters on this story: Robert Tuttle in Calgary at rtuttle@bloomberg.net;Sheela Tobben in New York at vtobben@bloomberg.net

To contact the editors responsible for this story: David Marino at dmarino4@bloomberg.net, Catherine Traywick