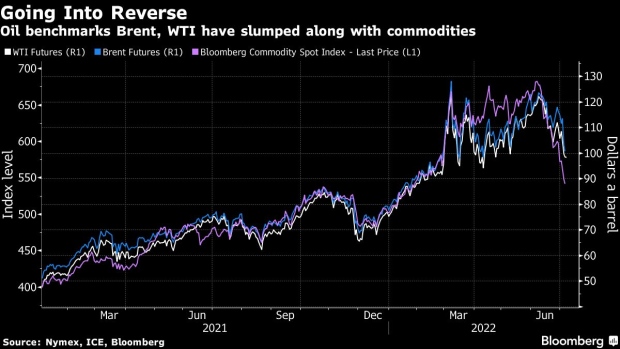 West Texas Intermediate fell below $98 a barrel and has shed about 10% so far this week. Escalating concern that a looming slowdown will hurt energy consumption has driven prices lower even as the market continues to show signs that crude supplies remain tight at present.

Oil’s sudden retreat means the world’s most crucial commodity has given up most of the gains seen in the wake of Russia’s invasion of Ukraine, which lifted US benchmark prices above $130 a barrel in March. Inflationary pressures prompted the US Federal Reserve to tighten policy aggressively, which in turn spurred expectations that a demand-sapping recession may lie ahead.

The industry-funded American Petroleum Institute reported US crude stockpiles expanded by about 3.8 million barrels last week, including a rise at the key storage hub at Cushing, Oklahoma, according to people familiar with the widely-watched figures. Official data on holdings will follow later on Thursday.

Oil markets remain in backwardation, a bullish pattern with near-term prices above longer-dated ones. Brent’s prompt spread -- the gap between its two nearest contracts -- was $3.57 a barrel, up from $2.43 a barrel a month ago.

The US and its allies, meanwhile, have discussed trying to cap the price of Russian oil between $40 and about $60 a barrel, according to people familiar with the matter. Allies have been exploring several ways to limit Russia’s oil revenues while minimizing the impact on their own economies.