Oil tumbled to near a two-month low as traders assessed a higher-than-expected price cap on Russian crude between US$65 and US$70 a barrel and a surprise build in U.S. products.

The European Union’s proposed range would be well above Russia’s cost of production and higher than some countries have been paying for its oil. As Russia is already selling its crude at discounts of US$20 a barrel in recent months, a high cap may have minimal impact on trading, keeping the nation’s supplies flowing into the global market. Talks were bogged down Wednesday as EU nations were split over how to design the plan.

West Texas Intermediate fell 3.7 per cent to settle below US$78 a barrel as investors digested rising U.S. product stockpiles, accelerating a selloff in thin trading. Gasoline stockpiles rose by 3 million barrels, the largest build since July, with demand plunging by the most in nearly two months heading into the Thanksgiving holiday. 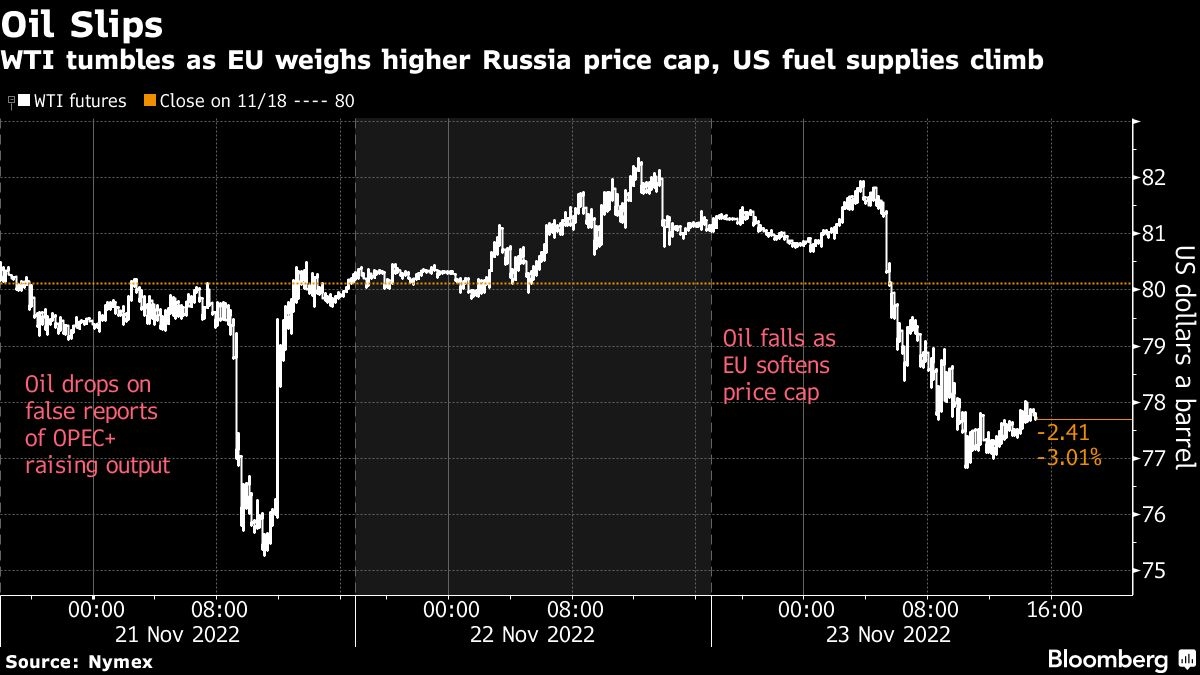 “The effectiveness of price caps as a mechanism to tighten the screws on Russia remains a big question for the market,” said Michael Tran, an analyst at RBC Capital Markets. “What such policy measures does do is raise the degree of positioning paralysis for oil traders that are already grappling with an anti-risk taking period of low liquidity.”

Russia has previously said that it won’t sell crude to nations that use the cap, which is designed to punish Moscow for its invasion of Ukraine while keeping the nation’s oil flowing.

Ambassadors are scheduled for more talks Wednesday night, with the aim of approving the proposed level. If an agreement isn’t reached, they could reconvene as early as Thursday as the cap needs the backing of all EU member states to be approved.

Crude prices have suffered several sharp downturns in recent days. Demand in China, the world’s largest importer, remains weak as the country presses on with Covid-Zero curbs. Beijing asked residents not to leave the city unless necessary, to stem the spread of the virus.

As the oil market has softened in recent days, both Brent and WTI have at times traded in a bearish contango structure for the first time in months. WTI’s nearest timespread flipped back into contango once again.