U.S. oil market is tight as a drum even though output is rising

Oil fell to the lowest since mid-March after the International Energy Agency said it will deploy 60 million barrels of oil from emergency stockpiles to bolster the historic release announced by the Biden Administration.

West Texas Intermediate closed below $97 a barrel after earlier rising as high as $104 on Wednesday. The IEA’s Fatih Birol said members will release 120 million additional barrels of oil, including about 60 million from the U.S. Meanwhile, government data showed U.S. crude stockpiles rose by more than 2 million barrels last week.

“The IEA’s consideration of releasing more SPR barrels beyond the U.S. is another bearish factor today, as the planned amount of released supplies is adding up, at this point, easing some of the supply fears,” said John Kilduff, co-founder at Again Capital LLC. 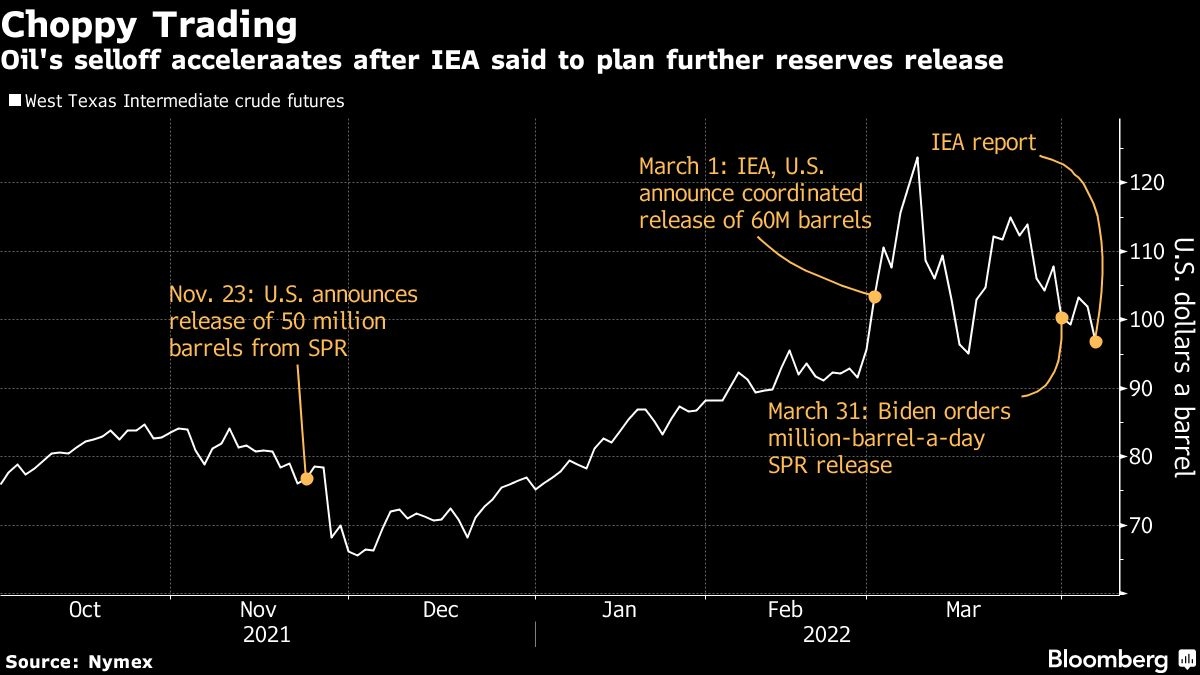 Oil prices have often struggled to find direction in a market with lower liquidity as headlines send futures swinging in both directions. Volatility remained heightened as oil executives testify in the U.S. on oil and gas prices before the House Energy and Commerce Committee. Average retail gasoline prices hit a record last month, according to data from the American Automobile Association.

“Oil executives are talking to Congress right now, so there’s some seesaw on that news,” said Rohan Reddy, a research analyst at Global X Management.

Crude surged by a third in the first quarter as the Russian invasion and backlash from the EU and U.S. roiled markets. While the U.K. and Washington have moved to bar Russian crude, it’s harder for the EU to follow suit given the region’s high level of dependence.

In recent sessions, prices have come off the highs seen in early March with Washington and the IEA tapping strategic petroleum reserves to try to calm markets, while the coronavirus outbreak in China has also contributed to a pullback.

Still, the President of the European Council, Charles Michel said that measures on Russian oil will be needed sooner or later, as he condemned reports of atrocities.

“Everything to me points to the market being in a pretty difficult place on the supply side,” said Callum MacPherson, head of commodities at Investec Plc. “The main bearish point I can see is the China Covid outbreak, everything else looks pretty bullish.”

The coronavirus outbreak in top oil importer China is hurting energy demand as cities including Shanghai have been placed under lockdown. The country reported more than 20,000 new cases for Tuesday.