Investors can add on weakness in copper and oil: Portfolio manager

Oil tumbled as everything from Wall Street sentiment to sagging demand for physical barrels of crude pointed toward an economy headed toward a slowdown.

Brent futures fell below US$90 a barrel for the first time in six weeks and West Texas Intermediate settled at the lowest since September. While Federal Reserve officials reiterated their resolve to continue raising interest rates and warned of pain ahead, lackluster demand among oil traders for crude this winter signaled a slowdown may already be underway in energy markets.

Pullbacks were evident along most of the oil-trading complex. Prices for crude cargoes in trading hubs from Houston to Singapore have fallen, surprising traders who expected prices to rise ahead of the European Union’s approaching ban on Russian oil imports. The oil curve, a reflection of where the market sees future prices, has collapsed, with the U.S. oil market on the cusp of flipping into a structure that signals oversupply for the first time since last year.

Crude bids have collapsed as the reality sets in that Chinese demand most likely gets worse before it gets better, said Rebecca Babin, a senior energy trader at CIBC Private Wealth Management. “Front month time spreads -- the backbone of tight markets -- are the weakest they have been since March 2021 signaling demand concerns are real and investors should be cautious when buying the dip.” 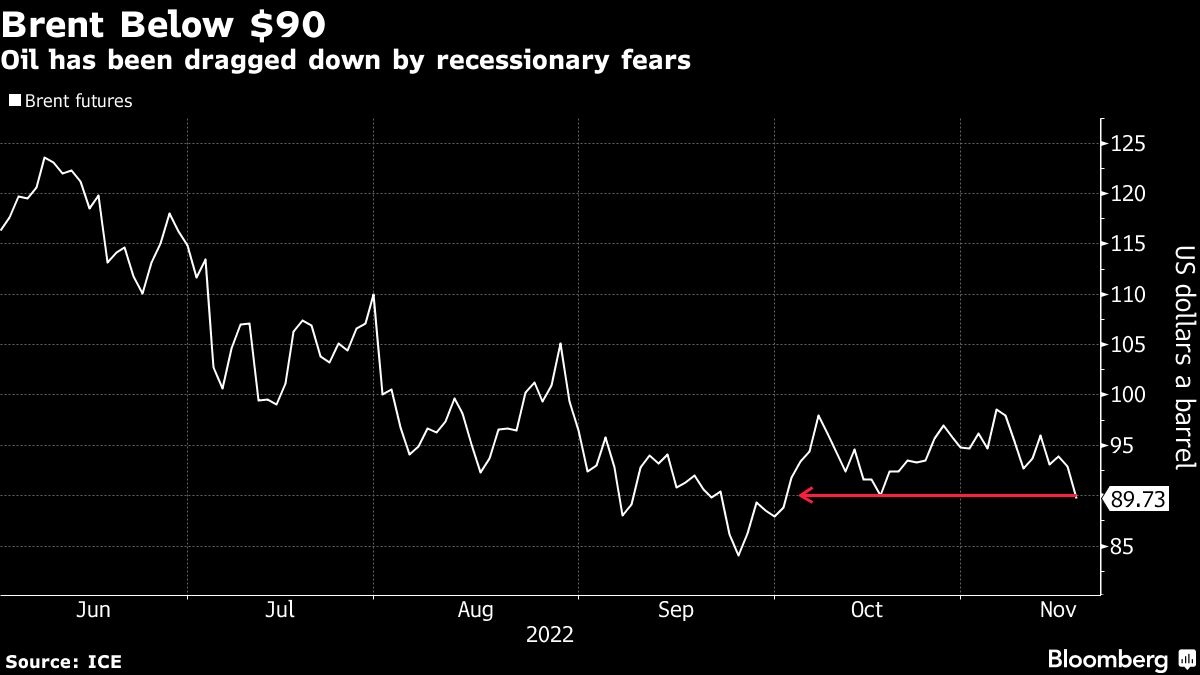 While lower-than-usual inventories and geopolitical risks have lead to occasional spikes, recessionary fears have weighed heavily on crude prices in the second half of this year. JPMorgan Chase & Co. projected the U.S. will enter a “mild” recession next year due to interest-rate hikes. Meanwhile, traders are keeping their eyes peeled on rising Covid cases in China as an indicator for crude consumption.

A short burst of optimism from China’s decision to ease some quarantine restrictions last week fizzled as it’s become apparent that rising Covid cases there will continue to stymie travel.

Oil traders are also having to grapple with surging rates to charter ships to haul oil across the globe. On Wednesday, benchmark earnings for supertankers that can haul 2 million barrels jumped above US$96,000 a day. Ships on the U.S.-to-China route now cost almost US$15 million, the most since April 2020. The strength in freight is weighing on the crude market’s structure, the Citigroup analysts said.