Oil could reach $80 three weeks from now as we get used to Omicron: Analyst

Oil posted its worst single-day rout this month on growing concern over the rapid spread of the omicron virus variant and turmoil for President Joe Biden’s economic plans.

Futures in New York closed down 3.7 per cent, trading around US$68 a barrel, as the January contract expired on Monday. Pessimism prevailed across financial markets as rising infections prompted restrictions on travel, while U.S. economic sentiment took a hit after Biden’s US$2 trillion spending package was derailed by the surprise revolt of Senator Joe Manchin.

“The uncertainty around the response to omicron” is fueling the fear and volatility in oil markets, said Rebecca Babin, senior energy trader at CIBC Private Wealth Management. While some governments at first said they were trying to avoid lockdowns, more may be forced to capitulate as omicron takes hold.

Oil’s market structure is also showing signs of weakness. West Texas Intermediate futures for delivery in January slipped to a discount to February contacts as omicron darkened the near-term demand outlook. The Brent prompt spread was also in a bearish contango pattern. 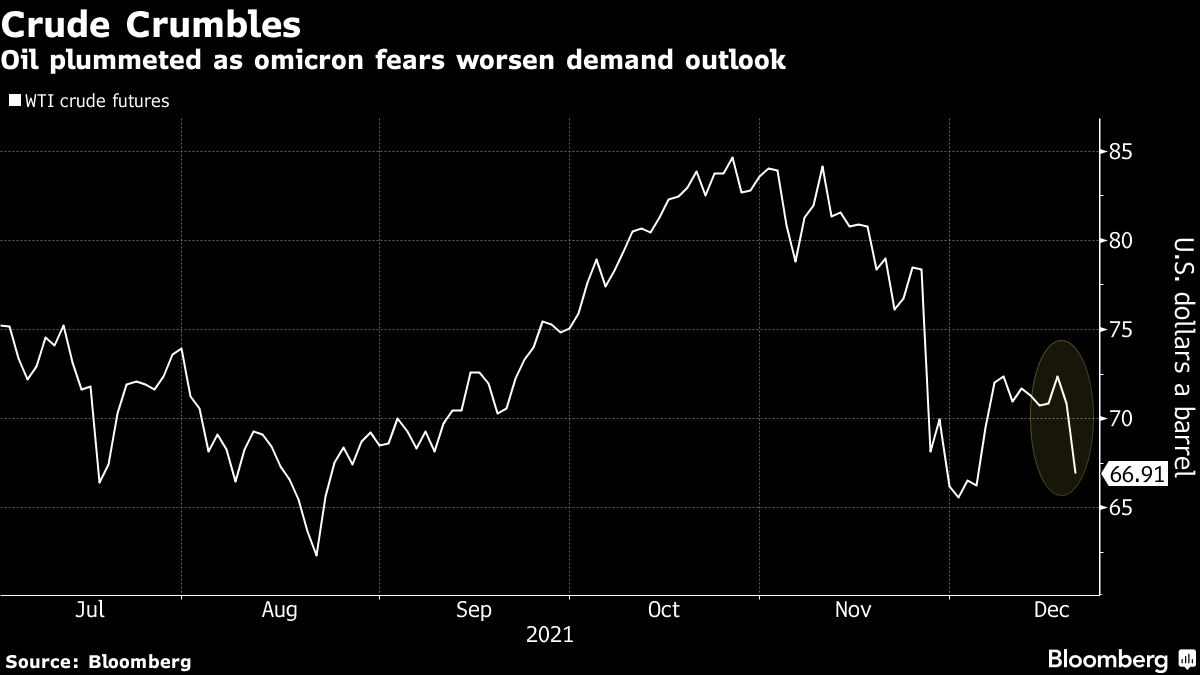 Oil has fluctuated in recent weeks amid conflicting signals about omicron’s potential impact to demand. Bearish headwinds continue mounting with consumption in Asia softening and central banks pivoting toward tighter monetary policy to rein in accelerating inflation. As the year comes to an end, moving into the holiday period, thinner trading volumes can exacerbate prices swings.

Meanwhile, New York state broke a record for new infections and New York City Mayor Bill de Blasio called on the federal government to step up supplies of tests and treatments amid a spike in infections caused by omicron. The Dutch government announced plans to enforce a stricter lockdown, while Germany’s health minister warned of another virus wave caused by omicron. The World Economic Forum postponed its annual meeting in Davos, Switzerland, next month.

“It is not a case of if but when governments impose tougher restrictions,” Stephen Brennock, an analyst at brokerage PVM Oil Associates, said of the impact of the omicron variant.