Commodities Update: oil up 85 per cent past year, lumber rises

Oil fell for a second day with an increase in U.S. crude inventories compounding concerns around a choppy global demand recovery.

Futures in New York fell 2.1 per cent on Wednesday after a U.S. weekly inventory report showed the first gain in domestic crude supplies in a month. Meanwhile, a resurgent coronavirus in India is curbing fuel consumption.

“The price pullback has been over rising uncertainty in regards to global oil demand, given the rise in infections, particularly in India,” said Rob Thummel, a portfolio manager at Tortoise, a firm that manages roughly US$8 billion in energy-related assets. “India is a large, high growth market for oil. What’s going on in the country with Covid-19, at least in the near-term, could pose a challenge for demand.” 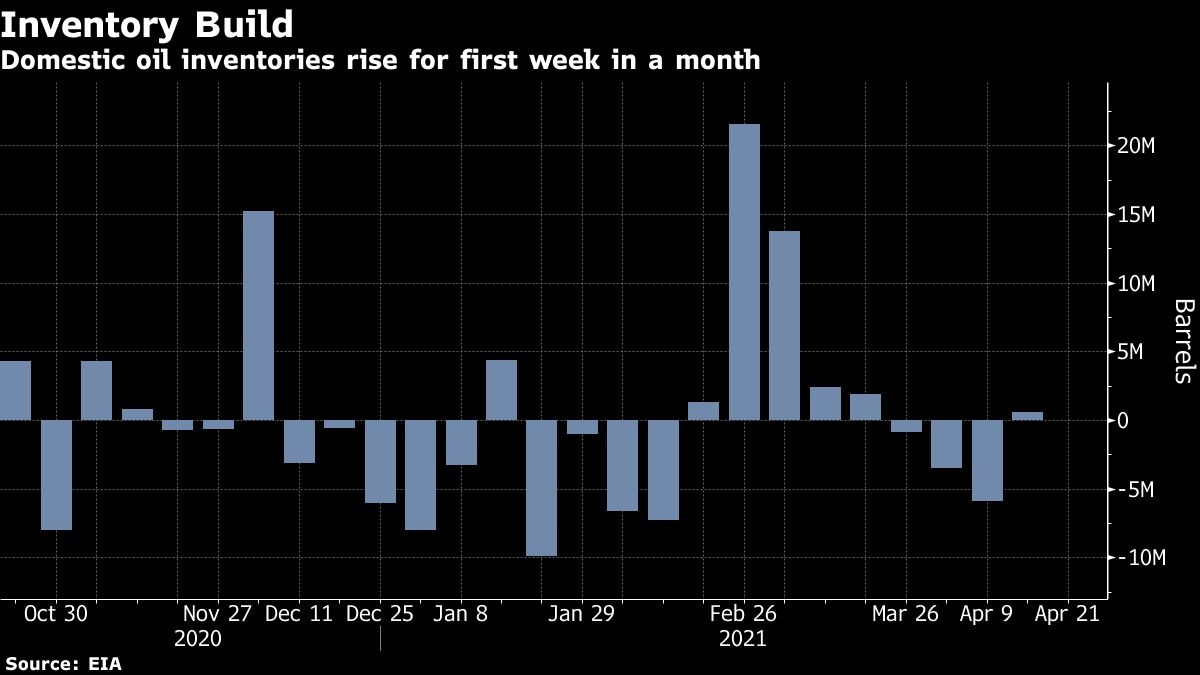 U.S. benchmark crude prices are still up more than 25 per cent this year with the country proving to be a bright spot for demand as a speedy COVID-19 vaccine rollout boosts domestic travel. A gauge of U.S. gasoline consumption is showing a steady trajectory higher and jet fuel cargoes are on the way to the West Coast from Asia to satisfy growing demand from airlines.

There are also positive signs emerging in some other parts of the world. Congestion during morning rush hours in cities including Beijing was higher than 2019 levels in the week to April 12, according to TomTom International BV. In the U.K., road use reached 99 per cent of pre-pandemic levels on April 18, government data show.

“The market’s about fairly valued, and will likely resolve itself to the upside over time,” said Bill O’Grady, executive vice president at Confluence Investment Management in St. Louis. “Once we get toward summer, we’ll see demand pick up,” which will lift prices.

Still, oil prices are struggling to break out of its recent trading range. Soaring virus cases in India, the world’s third largest oil importer, have forced the financial and political capitals to impose curbs on movement. Prime Minister Narendra Modi has asked states to avoid shutting businesses, but “the health burden may soon catch up and force Indian authorities to respond more harshly,” according to Rystad Energy AS.

While the oil market is right about being bullish for the future, “it needs to be careful,” according to Amrita Sen, co-founder of consultant Energy Aspects Ltd. in London. “This is not going to be a uniform recovery, it’s going to be stops and starts,” Sen said during a virtual presentation hosted by The Houston Economics Club.