Plunging oil prices usually boost airlines by bringing down the cost of their biggest expense. But for carriers locked into buying fuel at higher levels, the drop offers little relief from the coronavirus epidemic that has wiped out demand for travel.

With crude in freefall, hedging positions aimed at protecting against future price increases -- such as those taken by Singapore Airlines Ltd., British Airways and Ryanair Holdings Plc -- are now costing carriers money.

Brent tumbled by almost a third to US$31 a barrel, the most since the Gulf War in 1991, whereas Singapore Airlines is hedged at US$76 on four-fifths of its fuel needs through the end of this month.

“The dramatic drop in oil prices is nothing to cheer about for airlines this time because virtually no one is traveling,” said Bang Min Jin, an analyst at Eugene Investment & Securities Co. in Seoul, one of the cities worst hit by the outbreak. “Airlines that have little exposure to hedging will be in a better position than those that have bigger exposure.” 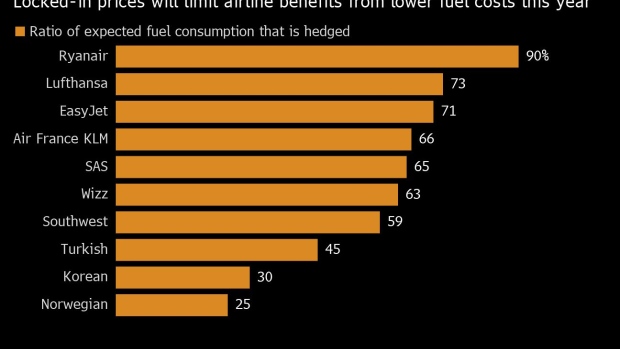 Before the roiling of oil markets, the International Air Transport Association warned last week airlines may lose US$113 billion in sales in 2020 due to Covid-19, almost four times more than estimated two weeks earlier. It also said a fall in fuel prices, though nothing like what has since occurred, could cut costs by US$28 billion, providing some relief from a “devastating impact” on demand.

Airlines hedge fuel costs in a multitude of ways. Some cover themselves using crude prices, where liquidity is greatest. Others will do so directly in the jet-fuel market. Their actions will often entail the purchase of options enabling them to buy at specific prices.

Dublin-based Ryanair has hedged 90 per cent of its fuel requirement at an average of US$606 a metric ton for the year beginning April 1, according to a February presentation, equating to about US$77 a barrel.

British Airways parent IAG SA has hedged more than 90 per cent of its needs in the first three quarters of 2020, it said in an investor presentation last month.

Airlines in China and India do not hedge on fuel, though the advantages that Chinese operators in particular will gain from a lower bill are just a drop in the ocean when contending with traffic that’s virtually at a standstill.

Korean Air Lines Co. hedges only about 30 per cent of its fuel needs, but has cut more than 80 per cent of its capacity due to the coronavirus, so that any benefit from oil’s slide “won’t be much,” a spokeswoman said.

Those carriers that manage to ride out the epidemic may benefit in coming years from being able to hedge at crude’s new lows, with many beginning to lock in prices over the past month.