Oil closed lower, yet its underlying market structure firmed, as investors assessed the challenges to a global economic recovery.

West Texas Intermediate crude futures slipped 0.3 per cent on Thursday after a choppy session. Despite fluctuations in headline prices, the oil futures curve is showing strength. The premium on the nearest global benchmark Brent contract rose to the highest in a week against the following month. The bullish backwardation structure indicates tightening supplies. WTI’s so-called prompt spread also strengthened.

Yet, signs of a mixed economic recovery pressured benchmark crude. In the U.S., where a rebound in consumption is occurring amid a widespread vaccine rollout, jobless claims unexpectedly rose, highlighting the choppy road ahead. Meanwhile, India, the world’s third-biggest oil importer, reported a record number of daily COVID-19 cases, and several nations including the Netherlands are limiting the use of a COVID-19 vaccine due to potential complications.

“The market’s waiting to see which way this goes,” said Rob Haworth, senior investment strategist at U.S. Bank Wealth Management. “The question is, is demand really recovering enough to absorb the increase in OPEC output?” 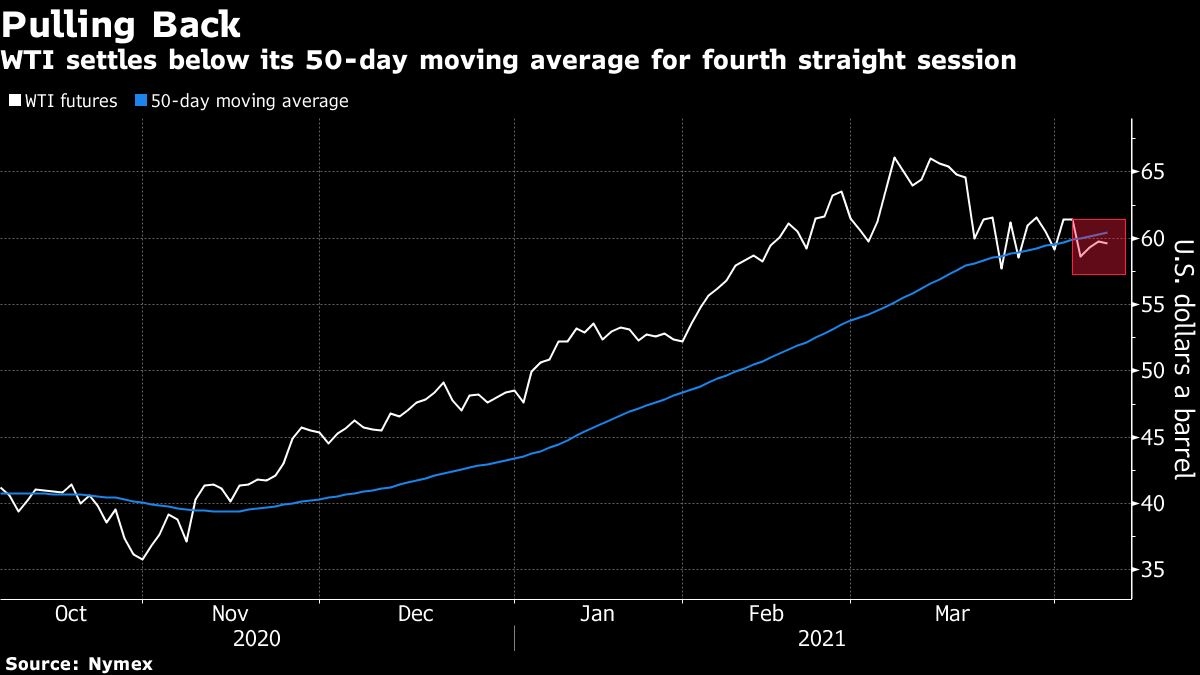 U.S. benchmark crude futures have been stuck in a narrow band around US$60 a barrel in recent weeks. While signs of demand picking up in places like the U.S. has buoyed sentiment, fresh COVID-19 outbreaks and renewed lockdowns in other parts of the world have acted as a counterweight. Despite recent price setbacks, Saudi Arabia’s Energy Minister Prince Abdulaziz bin Salman said the country remains confident in its decision to gradually increase production.

“CTA and momentum funds remain directionally long oil futures, but have pared down position sizes in recent days and weeks due to elevated market volatility and a stronger U.S. dollar,” said Ryan Fitzmaurice, commodities strategist at Rabobank. These factors are starting to reverse, which could signal that the liquidation phase is nearing an end for CTAs, he said.

With virus cases continuing to flare up, the chances of a simultaneous reopening of the global economy over the northern-hemisphere summer have decreased, RBC Capital Markets analysts wrote in a report. However, it is possible that an easing of lockdowns could be phased around the world over that period, they said, aiding the market as fall approaches.

Facts Global Energy increased its estimate for global oil demand growth this year to 6 million barrels a day, up 75,000 barrels a day from its previous forecast. Yet, U.K. government modeling shows a relaxation in restrictions may lead to more hospitalizations and deaths, FGE said. If applied to the rest of the world, such a scenario would see a significant slowdown in the consumption recovery.

Meanwhile, developments on discussions between Iran, the U.S. and other world powers surrounding the revival of a 2015 nuclear deal are adding further complexity to the market’s supply and demand equation. Iran’s chief negotiator at the talks in Vienna said the sides were focusing on removing U.S. sanctions in a single step, according to a statement that didn’t specify what Tehran was offering in return. The U.S. hasn’t yet responded to the comments.

--With assistance from Jack Wittels and Alex Longley.