Oil surged toward a 3 1/2-month high as attention turned to Iran’s threatened retaliation for the U.S. airstrike that killed the Islamic Republic’s top general.

Brent futures rose 3.5 per cent on Friday, the highest since the attacks on Saudi Arabia’s oil facilities in September. The airstrike near Baghdad airport killed Qassem Soleimani, the Iranian general who led the Revolutionary Guards’ Quds force. The U.S. intends to send “thousands of additional” troops to the Middle East amid rising regional tensions, CNN reported, citing an unidentified U.S. defense official.

“This is a seismic event in the region,” said Jason Bordoff, a former Barack Obama administration official who now works for Columbia University. “This is how U.S.-Iran tit-for-tat spirals out of control. Iran’s response will be severe and deadly. And certainly may include escalating attacks on energy infrastructure.”

Iran never won a war, but never lost a negotiation!

General Qassem Soleimani has killed or badly wounded thousands of Americans over an extended period of time, and was plotting to kill many more...but got caught! He was directly and indirectly responsible for the death of millions of people, including the recent large number....

....of PROTESTERS killed in Iran itself. While Iran will never be able to properly admit it, Soleimani was both hated and feared within the country. They are not nearly as saddened as the leaders will let the outside world believe. He should have been taken out many years ago!

Iran’s foreign minister Mohammad Javad Zarif in an interview with state TV said the Islamic Republic’s response to the U.S. killing the country’s top military commander will come “at any time and by any means.”

Prices eased somewhat as swelling U.S. gasoline and diesel inventories offset the biggest crude decline since June. The Energy Information Administration also reported record-high crude exports, which pulled Gulf Coast stocks down by the most ever. Stockpiles in the region often decline at year-end as companies manage tax exposure.

The EIA report couldn’t have pushed prices up more than what the Middle East attacks triggered, said Rob Thummel, managing director and portfolio manager at Tortoise, a Kansas firm that oversees more than US$21 billion in assets. “From here on the market will be watching for disruptions to global supply.”

The rally also drew selling from oil producers looking to lock in higher prices, something that typically happens in the first quarter, according to a person familiar with the matter. Several million barrels were sold for specific contracts as well as in time spreads, the person said.

Brent crude for March settlement rose US$2.35 a barrel to US$68.60, after rising as much 4.9 per cent earlier. The global benchmark’s bullish options bias was the biggest since early November while the December 2020 contract was at the widest premium to December 2021 since October 2018.

West Texas Intermediate for February delivery added US$1.87 to settle at US$63.05 a barrel, after advancing as much as 4.8 per cent. 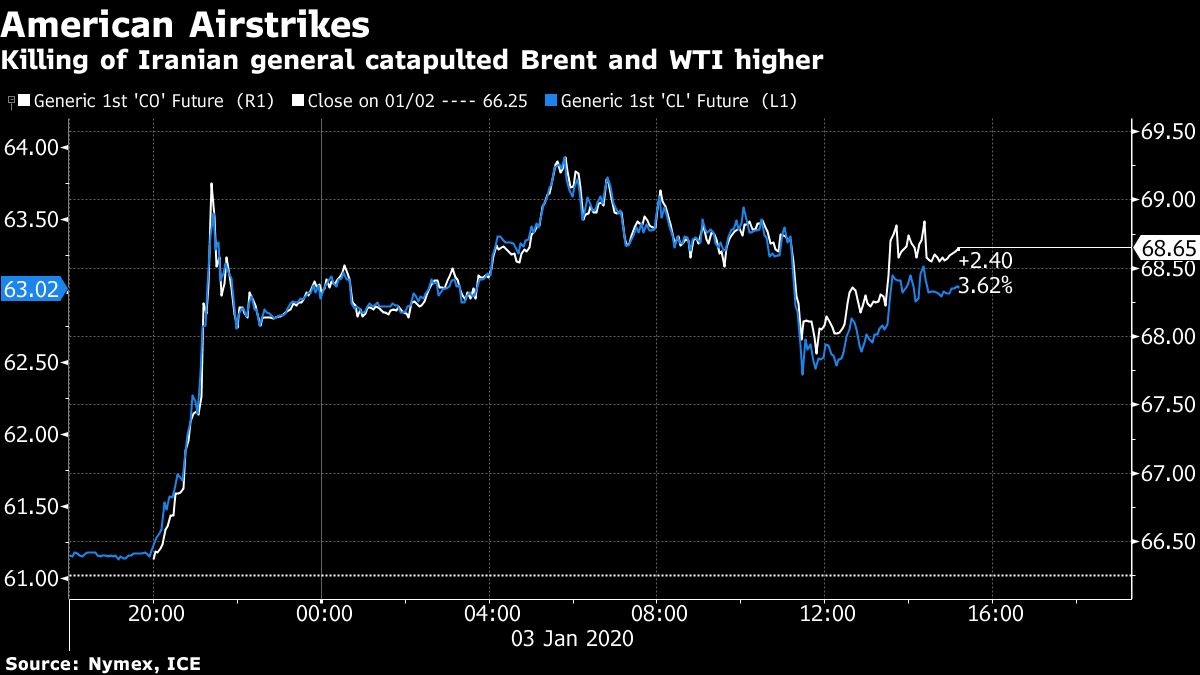 While no oil installations or production were affected, targeting one of Iran’s most powerful generals ratchets up tension between Washington and Tehran, heightening fears of an armed confrontation that could pull in other countries. Iran’s supreme leader, Ayatollah Ali Khamenei, vowed that “severe retaliation” awaits the killers of Soleimani.

Tensions have been building after an Iran-backed Iraqi militia stormed the American embassy in Baghdad to protest deadly U.S. airstrikes earlier this week.

Concerns in the region, home to five of OPEC’s biggest oil producers, have persisted over the past year as Saudi Arabia’s energy facilities as well as several foreign tankers in and around the Persian Gulf have been attacked.

The attack on Soleimani rattled other markets. The S&P 500 Index and the Stoxx Europe 600 Index slid, while gold neared a six-year high as investors sought safe haven assets.

The strike also escalates an already tense three-way situation between the U.S., Iran and Iraq. The two Middle East countries combined pumped more than 6.7 million barrels a day of oil last month, according to data compiled by Bloomberg, more than one-fifth of OPEC output. Exports from both countries rely on the Strait of Hormuz, the narrow and crucial oil and natural gas shipping choke-point.

“This is more than just bloodying Iran’s nose,” Stephen Innes, chief market strategist at AxiTrader Ltd., said in a note. “This is an aggressive show of force and an outright provocation that could trigger another Middle East war.”

Still, the rally could just as easily subside. While prices initially soared after the attack on Saudi Arabia’s Abqaiq processing facility in September, crude then retreated in another sign that the market is concerned more with a surplus than supply shortages.

OPEC is sitting on vast amounts of spare capacity after reducing supplies for most of the past three years. Consuming countries from the U.S. to China control millions of barrels stored in strategic petroleum reserves that can be deployed to offset any shortage.

In the biggest sign of the oil market’s transformation after the shale boom, the U.S. reported its first months as a net exporter of petroleum, including crude and refined oil products, late last year for the first time in roughly 75 years. In October, America exported a net 389,000 barrels a day, compared with net imports of close to 9 million barrels a day a decade or so earlier.