I don't think the oil and gas sector will perform as great as it has: Hedge fund manager

Global oil investment will be stagnant this year and may even decline as producers deal with surging inflation and volatile prices caused by Russia’s war in Ukraine, according to the International Energy Forum.

Crude prices have risen following the invasion in February, as uncertainty over supply security has riled markets. Meanwhile, OPEC and its allies have been slow to unwind coordinated production cuts, with some members of the group also struggling to restore output amid political protests.

In addition, increasing costs for energy projects as well as supply chain issues are making it harder to source equipment and may discourage spending, the Riyadh-based consultant and adviser said.

“These issues make investment decisions more challenging and less likely,” IEF Secretary General Joe McMonigle said in an interview. “For 2022, it looks like the situation is not improving and may get even worse.” 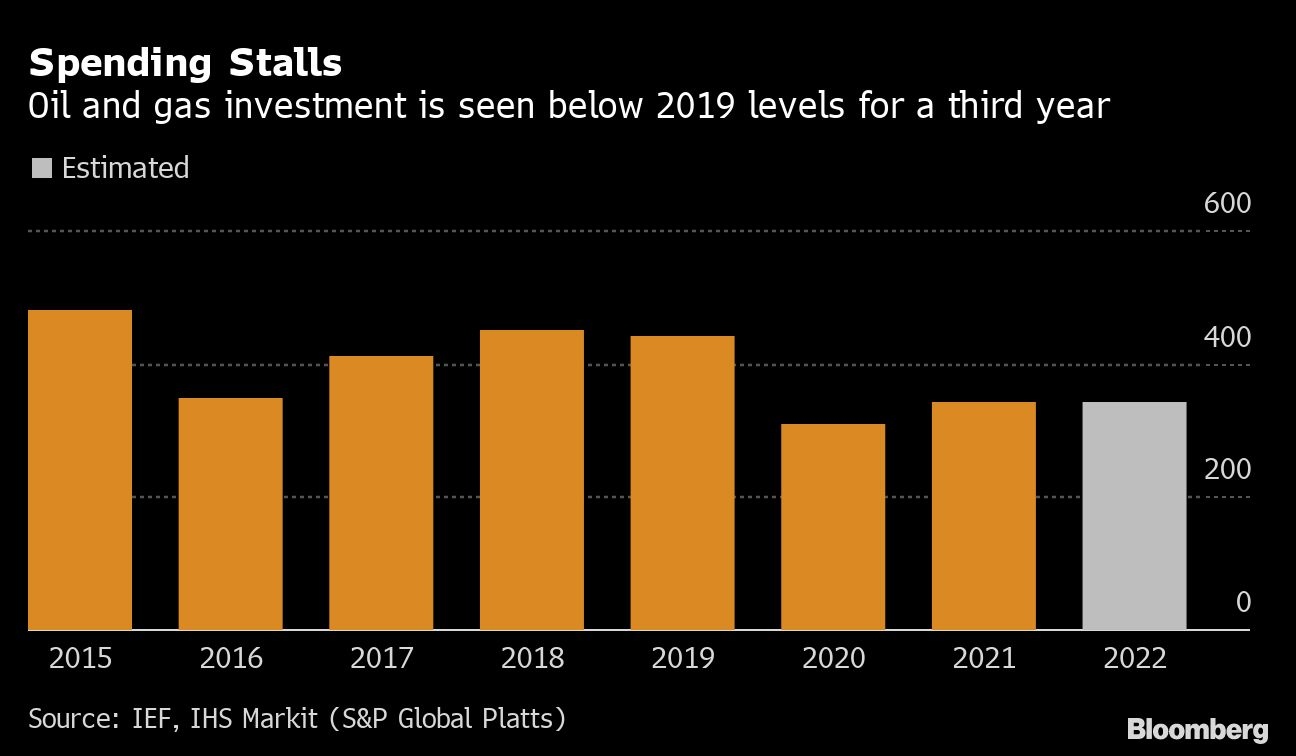 Investment is set to be below the US$441 billion spent in 2019 for a third straight year, endangering future energy security, according to the IEF. The consultant said in a December report with IHS Markit, a research unit of S&P Global Platts, that spending needs to be sustained at about US$525 billion a year through 2030 to meet global demand for crude and products.

Saudi Arabia, the de facto leader of the so-called Organization of Petroleum Export Countries and its allies, has criticized the industry’s lack of spending, saying that’s what has created the market’s underlying supply issues.

“There’s going to be a lot of pressure on spare capacity and that’s going to be bullish for prices,” McMonigle said. Only producers like Saudi Arabia and the United Arab Emirates will be able to pump significantly more oil, with about 2 million barrels of spare capacity between them, while US output increases have been slower than expected, he added.

International benchmark Brent oil has risen about 50 per cent so far this year, while petroleum products have also hit multiyear highs as markets tightened. The second half of 2022 will see higher prices and greater volatility in crude markets, McMonigle said, with supplies likely to be stretched as China and other countries in Asia roll back COVID-19 lockdowns while jet fuel demand recovers.

OPEC+ could pump more when its current program of supply reductions runs out in August. The group has appointed a new secretary general, an opportunity for a change in policy, McMonigle said.

“A change is coming, what it is is really unclear,” he said.