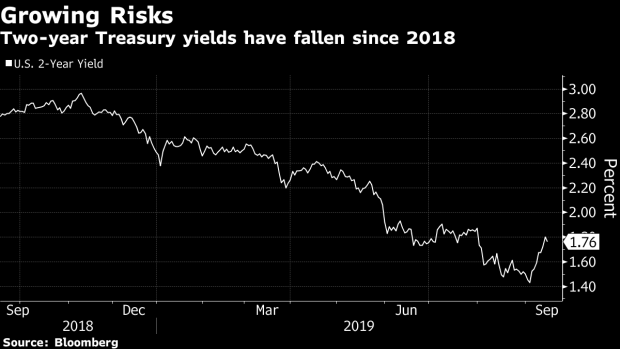 A drilling tower structure stands aboard the Oseberg A offshore gas platform operated by Statoil ASA in the Oseberg North Sea oil field 140kms from Bergen, Norway, on Friday, Jan. 17, 2014. Statoil, Norway's biggest energy company, sees the potential to keep domestic oil and gas output at today's levels until 2025 and possibly beyond even as it tightens spending amid rising costs. Photographer: Bloomberg/Bloomberg , Photographer: Bloomberg/Bloomberg

(Bloomberg) -- Surging oil prices will probably reinforce the Federal Reserve’s resolve to cut interest rates this week as insurance against rising global risks, though the immediate effect on the U.S. economy is likely to be small.

The Federal Open Market Committee is widely expected to lower rates by a quarter percentage point at a two-day meeting that begins in Washington on Tuesday. Economists didn’t see that changing despite oil prices soaring as much as 19% after a weekend strike on a key Saudi Arabian oil facility.

While the jolt could spell upward pressure for inflation, the Fed is more likely to add it to the list of downside risks already facing the U.S. economy, alongside uncertainty over U.S. trade policy and slowing global growth, which have chilled investment and manufacturing.

“The main effect would be to serve as a reminder of how fraught and uncertain the geopolitical environment is,’’ said Julia Coronado, president and founder of MacroPolicy Perspectives LLC. “Risk management means moving gradually so they don’t need to overdo it or panic. It’s best to move cautiously and evaluate incoming information.’’

Policy makers submitted interest-rate forecasts prior to the strike and are likely to be cautious in making changes this week in light of a situation that is quickly changing, economists said.

Economists surveyed by Bloomberg forecast the Fed will cut rates to a 1.75%-2% target range and investors have also almost fully priced such a move.

The U.S. economy has proven to be more resilient from oil-price shocks -- positive and negative -- than in the past because the nation has become a much larger producer of energy. Former Chair Janet Yellen in December 2014 referred to a plunge in oil prices as a benefit to consumers like “tax cut that boosts their spending power’,’’ yet those effects were largely offset by slumping investment in the oil patch.

“On the margin, the FOMC will lean a bit more dovish due to the elevated geopolitical risks’’ though still go ahead with a quarter-point cut, said Brett Ryan, senior U.S. economist at Deutsche Bank Securities.

A 10% increase in oil prices would have a “relatively modest negative impact’’ on gross domestic product which would be “more muted than in the past,’’ Federal Reserve Bank of Dallas President Robert Kaplan wrote in a June 2018 commentary. “This negative impact should further diminish as the U.S. continues to grow its domestic oil production,’’ he wrote.

Even so, “an extended increase in prices would challenge the outlook as it comes at a tricky time for manufacturers and consumers,” said Sarah House, a senior economist with Wells Fargo & Co. “Tariffs are already pushing up costs and prices. Consumers are now facing a dual hit to real spending power, which creates a hurdle for consumers to carry growth at a time when capital spending is struggling.”

A sustained 5% gain in gas prices, or about 15 cents a gallon, might cost consumers a little more at the pump and potentially affect discretionary purchases such as restaurant sales, said Deutsche’s Ryan. There could also be a “minor hit’’ to consumer confidence, he added.

In terms of the impact on the U.S. energy industry, increased prices are unlikely to bring any immediate boost to drilling, but will be “a meaningful increase in cash flow for energy companies that have thin margins’’ easing debt concerns, said Jason Schenker, president and founder at Prestige Economics LLC in Austin, Texas.

“The Fed will completely look beyond what is happening with oil prices. In fact, it may make them more inclined to look through price pressures which may be related to other factors, such as tariffs, as well. Oil prices will have zero impact on Fed policy plans.”-- Carl Riccadonna, chief U.S. economist

The FOMC is likely to view the inflationary impact of higher oil prices as a one-time bump rather than persistent. Inflation has been below the Fed’s 2% target for most of seven years, so temporary price gains might be welcome rather than concerning.

Beyond the direct effects on the U.S., surging oil prices could lead to even slower global growth, “and that could feed back to the U.S. via lower exports,’’ said William English, a Yale University professor and former senior Fed economist.

“I suspect we won’t know enough for the committee to respond at this week’s meeting,’’ he said. “They will add this to the list of uncertainties affecting the outlook, and indicate that they are monitoring the situation.’’

To contact the editors responsible for this story: Alister Bull at abull7@bloomberg.net, Ana Monteiro