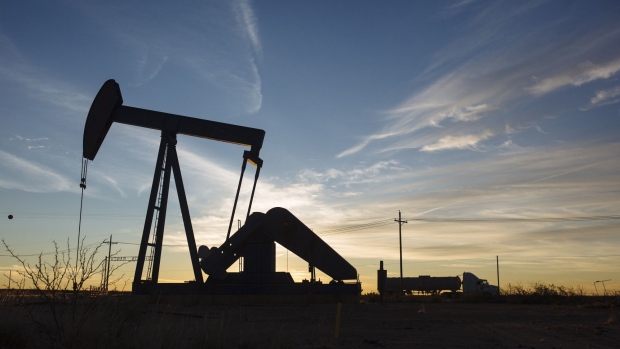 A tanker truck drives past a pump jack in the Permian Basin area of Loving County, Texas, U.S., on Saturday, Dec. 15, 2018. Once the shining star of the oil business, gasoline has turned into such a drag on profits that U.S. refiners could be forced to slow production in response. Photographer: Angus Mordant/Bloomberg , Bloomberg

(Bloomberg) -- Oil was steady in Asian trading, with a calmer geo-political scene offset by lingering worries on the U.S.-China trade war and on the supply outlook.

Futures in New York were down 0.1%, after rising 0.3% Tuesday to snap a five-day losing streak. Easing political tensions in the Middle East pushed investors’ focus onto the coming post-winter lull in demand. In a Bloomberg survey, analysts are predicting a 1.1 million-barrel increase in U.S. crude stocks in the past week. If the build is confirmed by data Wednesday, it would mark a second weekly rise in American supplies.

The U.S. and China are set to sign a phase-one trade agreement on Wednesday, but a report suggested that existing tariffs on billions of dollars of Chinese goods coming into the U.S. are likely to stay in place until after the American presidential election.

To contact the editors responsible for this story: Ramsey Al-Rikabi at ralrikabi@bloomberg.net, Keith Gosman