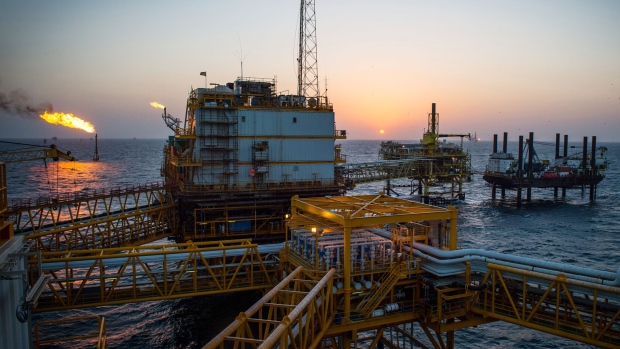 Oil surged above US$65 a barrel after Iran fired rockets at a joint U.S.-Iraqi airbase, reigniting fears that the killing of a top Iranian general will trigger a wider conflict in the Middle East that could disrupt global supplies.

Iran fired a series of rockets at the Ayn al-Asad base in western Iraq’s Anbar province early Wednesday morning Baghdad time, the Islamic Revolutionary Guard Corps said on its news website. The Islamic Republic also started a “second wave” of attacks targeting an unidentified American base in Iraq, according to the semi-official news agency Tasnim. A U.S. defense official confirmed that an attack was underway.

Futures in New York have climbed about 7% since the U.S. assassinated General Qassem Soleimani last week. The killing of the commander in a U.S. airstrike near Baghdad’s international airport has sparked a furious reaction from Tehran, which said on Tuesday it was assessing 13 possible ways to inflict a “historic nightmare.”

While flows from the Middle East still continue to be unimpeded for now, the risk of disruption is spooking the oil market amid warnings that energy facilities could be targeted. There’s particular trepidation about shipments through the Strait of Hormuz, a narrow and critical chokepoint for the region’s supplies that Iran has repeatedly threatened to shut down if there’s a war.

West Texas Intermediate oil jumped as much as US$2.95, or 4.7%, to US$65.65 a barrel on the New York Mercantile Exchange and was trading at US$65.07 as of 9:02 a.m. Singapore time. Brent crude surged as much as 5.1% to US$71.75. Prices settled lower on Tuesday as the hostile rhetoric between Washington and Tehran ensued without any impact on supply.

The Islamic Revolutionary Guard Corps told Iranian state television that further responses will be on the way in retaliation to the Soleimani strike last week. The White House has ordered additional forces to the Middle East and threatened Iraq with heavy sanctions if it followed through on its vote to expel foreign troops.

“We have to wait for the dust to settle,” Phil Flynn, senior markets analyst at Price Futures Group, said by email. It’s risk premium driving oil prices at this stage because oil facilities haven’t been attacked yet, he added.