Oil rallied on optimism that consumption could gradually return as major producers continue to cut output to counter a global glut.

West Texas Intermediate futures surged 22 per cent Wednesday. U.S. gasoline stocks fell by 3.67 million barrels compared to an estimated build of 2.49 million, according to the U.S. Energy Information Administration. Weekly gasoline supplied, an indicator of demand, rose by 549,000 barrels a day, the most since May.

“That was a nice surprise to the market,” Nick Holmes, portfolio manager at Tortoise, said regarding better-than-expected results for crude inventory and gasoline supply in the EIA report.

The discount on crude for June delivery relative to July, a structure known as contango, tightened to as little as US$3.28 a barrel after blowing out to as wide as $7.69 Tuesday. 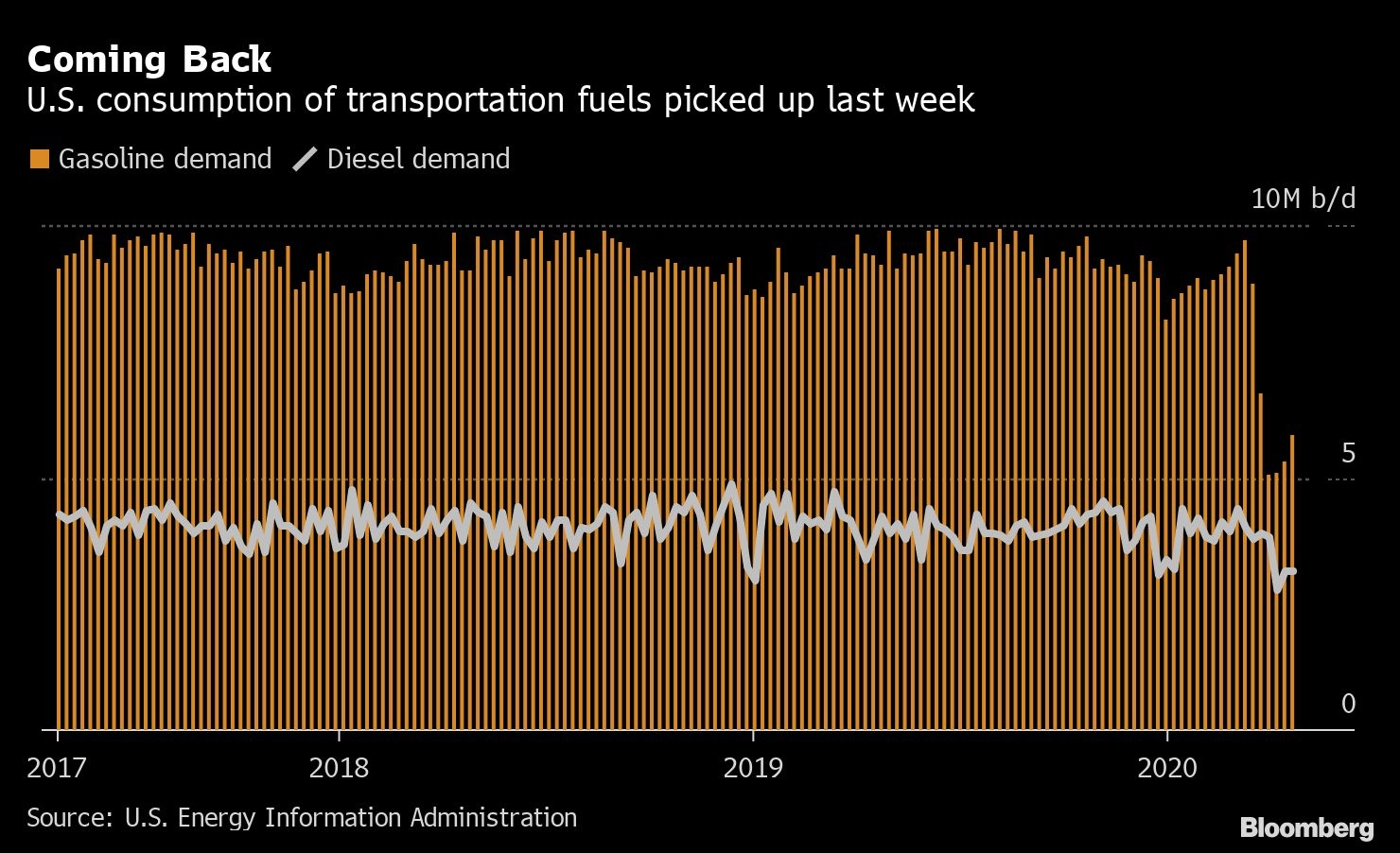 The narrowing gap in the front-month spread suggests that the concern about storage may be easing, according to Michael Lynch, president of Strategic Energy & Economic Research Inc. “People are starting to think storage isn’t going to get quite so overstuffed after the EIA report,” Lynch said.

The agency reported a smaller-than-expected 8.99 million-barrel increase in national crude stockpiles and a 3.64 million-barrel build at Cushing, Oklahoma, the delivery point for futures.

Producers in the shale-rich Permian Basin, and elsewhere in the U.S., will cut about two million barrels a day of output in May compared to March, said Mercuria Chief Executive Officer Marco Dunand in an interview.

Russian oil companies will cut output by about 19 per cent from February levels, the nation’s Energy Minister, Alexander Novak told the Interfax news agency. Nigeria, which has been struggling to sell its oil even at $10 a barrel, will ship the lowest volume of its key Qua Iboe crude grade since 2016 in May and June.

Valero Energy Corp. said in its first quarter earnings conference call that it sees gasoline demand to recover gradually, along with jet fuel at a slower pace. The company sees the best recovery in demand in the Midwest.

• While global oil prices remain near multi-decade lows, the heads of two major Canadian crude producers see reasons for hope that the market will rebound in the months ahead.
• Saudi Arabia may now be blowing through its reserves at the fastest pace in at least two decades, but the government is barely using the holdings to cover fiscal needs.
• OMV’s refineries in Europe are currently running at about 80 per cent and will operate at roughly that level for the full year