OPEC+ does not have as much spare capacity as they say they do: Bison Interests' Josh Young

Oil in New York jumped to the highest since 2014 following OPEC+’s decision to maintain a gradual supply hike even as a natural-gas crisis boosts crude demand.

U.S. crude futures advanced 2.3 per cent Monday. OPEC+ ministers ratified the 400,000 barrel-a-day output increased scheduled for November, according to a statement from the group. The decision comes as the world’s biggest oil company, Saudi Aramco, said the global natural-gas shortage has boosted crude consumption by by 500,000 barrels a day.

“Prices are at their highest in seven years. Inventories are about to fall to their lowest in 10 years,” said Damien Courvalin, the head of energy research at Goldman Sachs Group Inc., said in a Bloomberg Television interview. “It sets the stage for another meaningful leg higher here.” 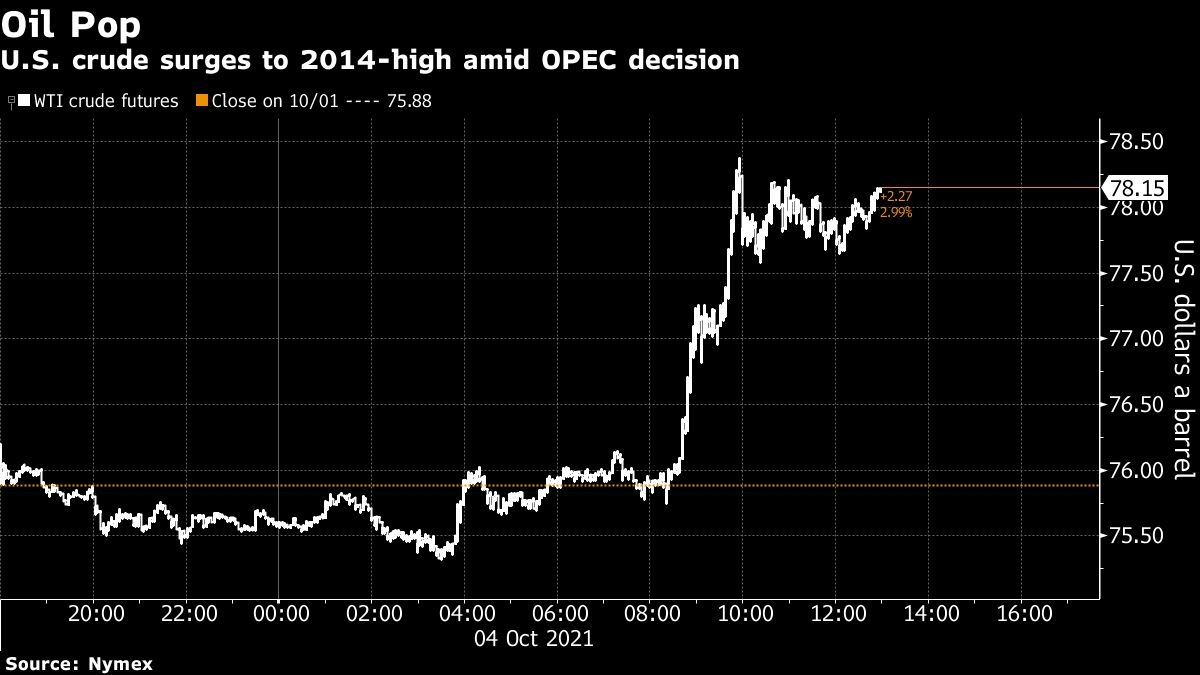 The crude market has tightened significantly following the economic recovery from the pandemic and supply disruptions in the U.S. Gulf of Mexico due to storms. Surging natural gas prices have also raised the prospect of increased demand for oil products for power generation and are boosting inflationary pressures on the global economy. Goldman estimates an extra 650,000 barrels a day of oil demand later this year from power switching.

Monday’s agreement “will allow us to continue normalize the market situation,” Russian Deputy Prime Minister Alexander Novak said in a speech at the meeting, part of which was broadcast by Rossiya 24 state TV channel. OPEC+ ministers will meet again on Nov. 4, according to a statement from the group.

“The consensus was that it was going to be an 800,000 barrel-a-day temporary boost in November,” said Rob Thummel, a portfolio manager at Tortoise, a firm that manages roughly US$8 billion in energy-related assets.

Amid surging crude prices, the International Energy Agency’s Fatih Birol said the agency expects to see oil prices soften in the next months and a price decline  will be “good news” for the global economic recovery.

Meanwhile, Royal Dutch Shell Plc resumed production at one of its main U.S. Gulf of Mexico offshore facilities, more than a month after Hurricane Ida brought production in the area almost to a halt. Service was restored at Shell’s 100,000 barrel-a-day Olympus oil and gas platform.