Oil market volatility is high since eastern Europe has lots of influence on it: Strategist

Oil jumped as simmering geopolitical tensions between Russia and Ukraine kept the market on edge and volatility high.

West Texas Intermediate surged above US$95 a barrel for the first time since 2014. Ukrainian leader Volodymyr Zelenskiy spooked markets with what appeared to be a sarcastic comment about the rest of the world predicting a date for a Russian attack.

Russia has repeatedly denied it plans to invade and its foreign minister said he would propose to continue diplomatic engagements with the West. A potential Russian invasion of Ukraine could not only disrupt crude supplies but also could spark retaliatory sanctions by the U.S.

“With a lack of clarity on the effect on oil and incredibly low inventories, the market is definitely worried here and buying,” said Scott Shelton, energy specialist at ICAP. 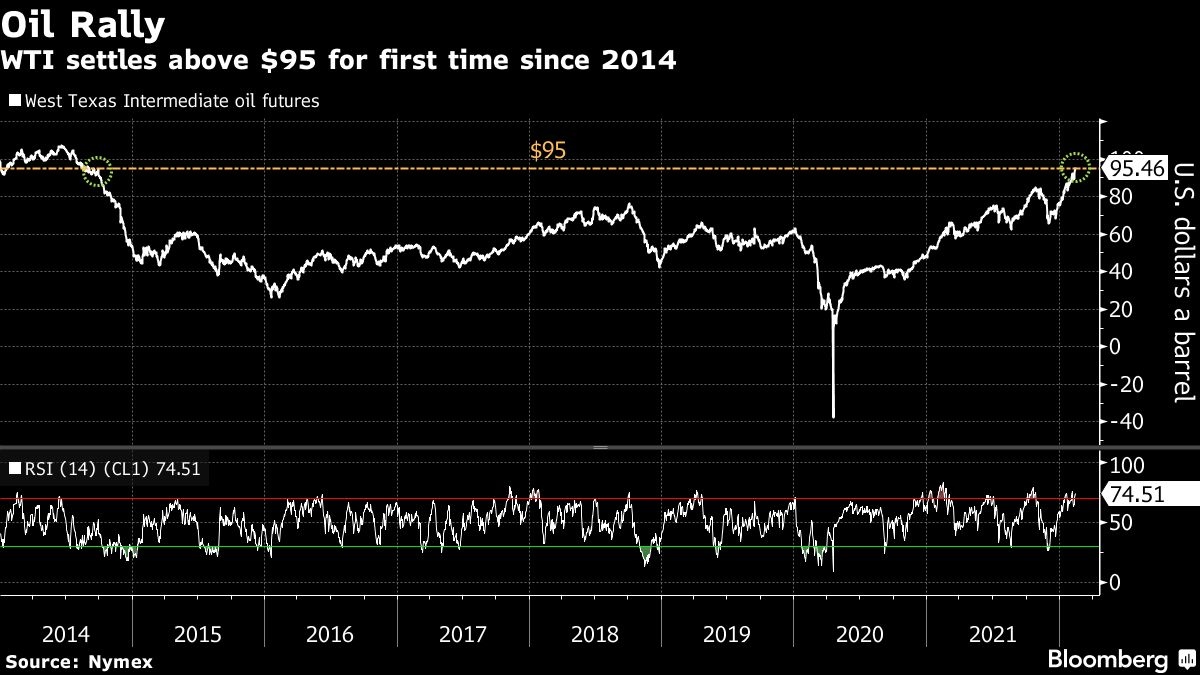 The situation is entering a potentially decisive week.  Russia could take offensive military action or attempt to spark a conflict inside Ukraine as early as this week, National Security Advisor Jake Sullivan said Friday. Russia has amassed troops near the Ukrainian border, though Russian President Vladimir Putin has repeatedly said his country has no plans to invade its smaller neighbor.

Oil prices are trading at 2014 highs as the crisis reinforces a rally that’s been underpinned by soaring worldwide demand, supply interruptions and declining stockpiles. Its run of weekly gains was the longest since October, before the emergence of the omicron virus variant. A potential conflict, coupled with retaliatory U.S.-led sanctions, would risk upending global energy flows.

While crude has been swinging wildly in recent days as tensions around Ukraine grow, the underlying market remains robust. Physical barrels priced off a key global benchmark are hitting unprecedented levels, and the spread between Brent crude’s two nearest futures contracts surpassed US$2 a barrel, a bullish indicator.

Oil option markets saw a surge of activity after prices spiked on Ukraine tensions Friday. Traders are paying bumper premiums for bullish call options, where higher prices would profit a buyer. They’re the most expensive relative to bearish put options since 2019, according to Bloomberg data.