Oil slipped after a volatile session as Libya urged OPEC+ to boost supply faster, while hints of possible progress emerged in peace negotiations between Russia and Ukraine.

Futures in New York closed down 1.5 per cent after trading in a range of more than US$5 a barrel. Libya called on OPEC to accelerate oil production increases, and U.K. Prime Minister Boris Johnson said after meeting with the Saudi Crown Prince that he’s optimistic the kingdom may raise its output, but got no guarantees it would occur. Russia said a Ukrainian proposal to become a neutral country but retain its own armed forces could be viewed as a compromise.

The International Energy Agency said Russian output could fall by a quarter next month, but also sharply reduced oil demand estimates for this year as a result of high prices. China is battling a new COVID wave and traffic in Shanghai is less congested in just one sign of the looming hit to the country’s demand.

“Much of the oil market is moving on geopolitical news,” said Rob Thummel, portfolio manager at Tortoise, a firm that manages roughly US$8 billion in energy-related assets. “The more peace talks, the higher probability of a resolution or agreement,” which in turn would lead crude prices to fall by removing the “risk premium embedded in oil in the short term.” 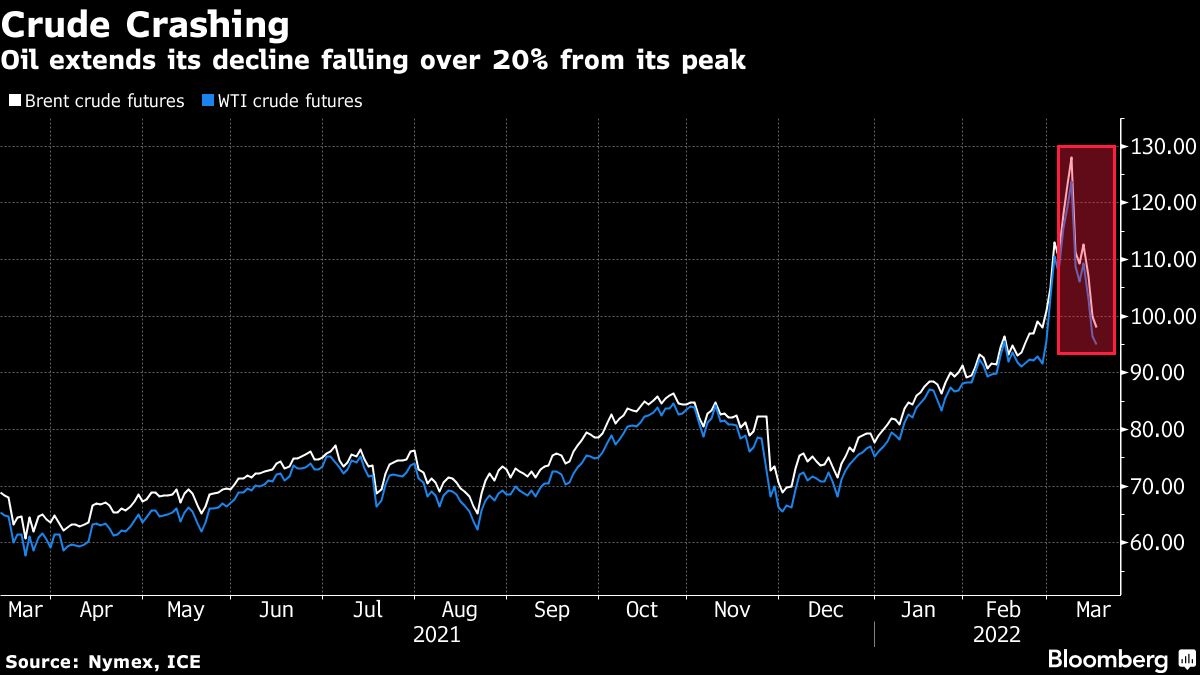 Oil has experienced one of its most tumultuous trading periods ever as the war in Ukraine and the ensuing sanctions against Russia drove wild price fluctuations that pushed volatility to historic levels. The conflict is raging on despite efforts for a cease-fire. The worst coronavirus outbreak in China since the pandemic began is adding a new layer of uncertainty.

Rising oil prices continue to pose a political risk for the Biden administration, which has kept a close eye on prices at the pump. The U.S., along with other major oil importers, has put pressure on OPEC+ to increase its output.

Russia’s chief negotiator, Vladimir Medinsky, reported “some progress” in the negotiations, but warned that few issues remain unresolved. Russia’s foreign minister Sergei Lavrov said there’s hope of reaching an agreement with Ukraine, though he added that discussions are not easy.

Brent crude had surged to nearly US$140 a barrel earlier this month, only to swiftly fall back to below US$100 this week, exceeding the threshold of 20 per cent used to characterize a bear market. The extent of the liquidation shows up in open interest figures. Holdings in oil futures have fallen to the lowest since 2015 across the main Brent and WTI contracts combined.

The U.S. Federal Reserve, meanwhile, raised interest rates by a quarter percentage point, launching a campaign to tackle the fastest inflation in four decades even as risks to economic growth mount.