Crude fell after the U.S. government announced it plans to allow Chevron Corp. to negotiate its oil license with Venezuela’s national producer.

West Texas Intermediate settled below US$113 on Tuesday. The Biden administration is going to calibrate its sanctions policy in a bid to promote dialog with Venezuela, a US official told reporters. The Treasury is allowing Chevron to negotiate its license with PDVSA, but more drilling or an increase in revenue for the regime is not allowed. Futures extended their tumble at the end of the session with Federal Reserve Chair Jerome Powell saying he won’t hesitate to raise rates above neutral if needed.

The proposed changes to alleviate some sanctions against Venezuela “should be seen as positive development, but not be mistaken as providing immediate relief to the tight market we are experiencing in real time,” said Rebecca Babin, senior energy trader at CIBC Private Wealth Management. 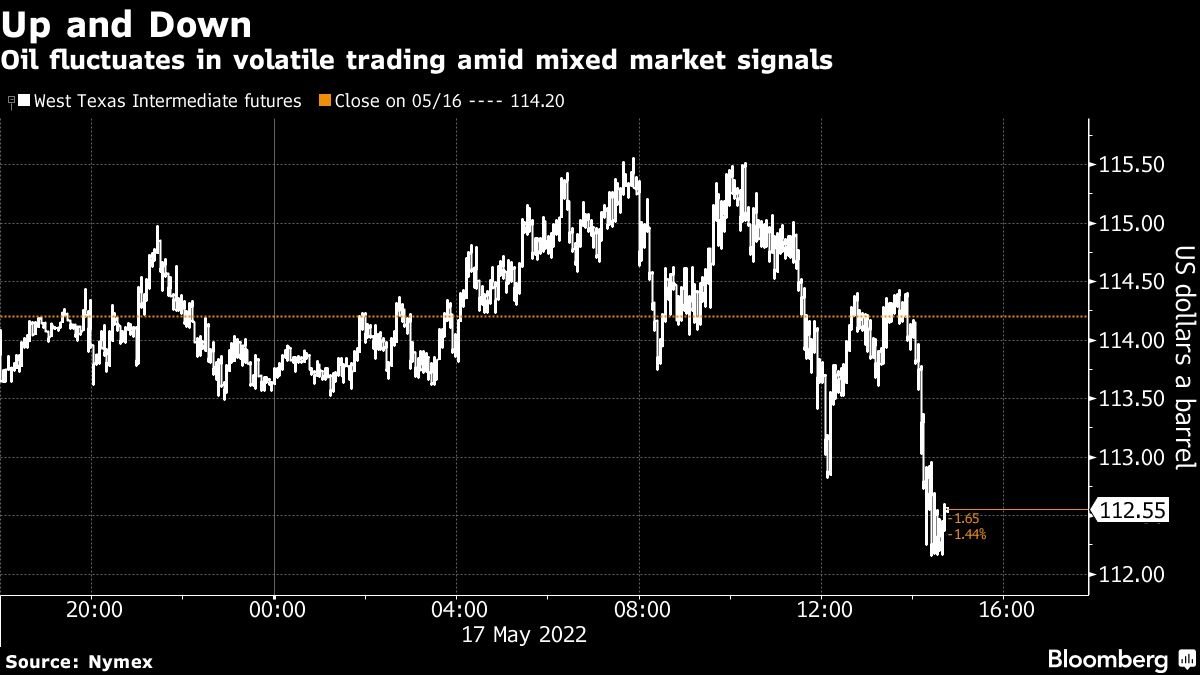 Oil has rallied more than 50 per cent this year in extremely volatile trading as the war in Ukraine tightened supplies, while demand outside of virus-hit China picked up. Global supplies remain strained with the European Union considering banning Russian crude and OPEC+ standing firmly against accelerating production increases.

Consumers are already feeling the pain at the pump, with prices of transport fuels rising across the globe. US average retail gasoline prices topped US$4.50 a gallon for the first time, according to auto club AAA, just a couple of weeks ahead of the summer driving season. That comes amid widespread tightness in oil-product markets across the globe.

The Associated Press earlier reported the news about Chevron.

The US will suggest tariffs on Russian oil as an alternative to embargoes, Reuters reported, a mechanism designed to keep the country’s supplies on the market while limiting revenues to Moscow. A European Union proposal to ban imports of Russian crude has been delayed amid opposition from Hungary, which said the decision would cost at least US$810 million.

In China, meanwhile, Shanghai reported no new COVID-19 infections in the broader community for a third consecutive day, hitting a crucial milestone that authorities have said will allow them to start unwinding punishing restrictions. Still, one part of Beijing’s Fengtai district will lock down in some areas for seven days, underscoring the country’s continued battle with the virus.

US crude stockpiles at a key storage hub in Cushing, Oklahoma, have contracted by about a quarter this year. Holdings at the delivery point for benchmark US futures likely fell by about 2.629 million barrels in the week ended May 13, traders said, citing data from consultant Wood Mackenzie Ltd.

“We are getting into uncharted territory of crude inventories,” said Peter McNally, global sector lead at Third Bridge. “It’s tricky to implement these bans at a time when demand normally picks up and inventories are low.”