Oil rose to the highest since early March with a second straight weekly decline in U.S. crude supplies underscoring the progress the world has made in draining a record supply glut built up last year.

Declining crude stockpiles in the U.S. support the International Energy Agency’s view that the world has largely worked off the surplus it accumulated when the pandemic devastated demand. While the agency cut its oil consumption forecasts in a monthly report, it said the glut is now just a small fraction of levels seen at the depths of the coronavirus fallout last year.

“Inventories are still trending in the right direction,” said Quinn Kiley, a portfolio manager at Tortoise, a firm that manages roughly US$8 billion in energy-related assets. “The economy globally is reopening and that should continue, so we should see continuing draws.” 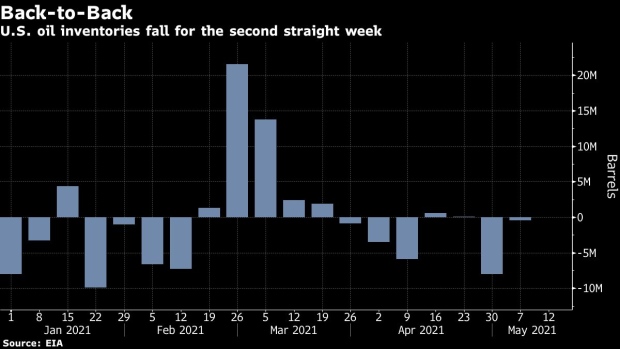 The weekly storage report showed domestic supply levels ahead of the cyberattack that halted the largest U.S. oil-products pipeline system. Panic-buying spurred by the ongoing outage of the Colonial Pipeline has pushed retail gasoline prices above US$3 a gallon for the first time in more than six years, while supplies at some terminals have been wiped out on the U.S. Northeast. That’s all before the upcoming summer travel season is expected to unleash a wave of pent-up demand built up during the pandemic.

“Even if everything is fixed at this second, we’re probably still looking at a couple of weeks of trouble,” said Bill O’Grady, executive vice president at Confluence Investment Management in St. Louis. “That runs us right into Memorial Day,” around which the U.S. summer driving season starts.

Still, the impact of the shutdown on headline crude prices is muted for now. The market remains buoyed by prospects for recovering energy demand around the world and broader bets on global inflation. U.S. consumer prices climbed in April by the most since 2009, exceeding forecasts, official figures showed Wednesday.

West Texas Intermediate for June delivery climbed 80 cents to settle at US$66.08 a barrel

Brent for July settlement gained 77 cents to US$69.32 a barrel

The U.S. average retail gasoline price was at US$3.008 a gallon, according to auto club AAA

The report also gave some insight on the state of gasoline inventories on the U.S. East Coast before Colonial was idled. Stockpiles of the fuel in the Central Atlantic fell 1.15 million barrels last week, though they remained near the region’s five-year average, providing some cushion to last through the pipeline outage. But in the Lower Atlantic, which is the most reliant on the pipeline, gasoline inventories were at their lowest since 2016 for this time of year, even with a 815,000-barrel build last week.