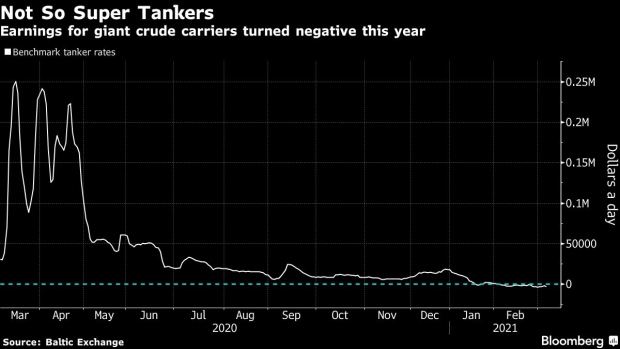 The Front Jaguar, a crude oil tanker operated by Frontline Ltd., left, anchors near another tanker off the coast of Southwold, U.K., on Friday, May 15, 2020. Nine tankers carrying about 5.58 million barrels of North Sea crude that loaded in April are floating off U.K. ports, according to ship-tracking data compiled by Bloomberg. , Bloomberg

Shares of owners giant supertankers including Frontline Ltd., International Seaways Inc. and DHT Holdings Inc. all fell late Thursday and into Friday. The Organization of Petroleum Exporting Countries and its allies wrong-footed oil traders on Thursday by keeping oil production for April almost unchanged when the market had been expecting more barrels.

For months now, the tanker market has been plagued by an oversupply of ships, a lack of volume sailing at sea as OPEC+ keeps a strict lid on production, and a huge unwinding of vessels that had been storing cargoes. That’s pushed rates on the benchmark Saudi Arabia-to-China route below zero since the start of February, meaning owners are effectively subsidizing cargo deliveries. OPEC+’s latest move will mean fewer cargoes, compounding the tough start to 2021.

“It’s a disappointment, as I’m in the camp of believers in demand being strong,” said Lars Barstad, interim chief executive officer of Frontline Ltd.’s commercial management company. “Non-OPEC will benefit here. The U.S., North Sea, Brazil and others will all thrive,” boosting long-distance cargo trades.

There had been hope that OPEC and its allies would add supplies back to the market at their meeting on Thursday. With seaborne supply now set to be withheld for longer, any recovery has now been pushed back.

“The mood is depressed,” said Halvor Ellefsen, a tanker broker at Fearnleys. “A continuation of the cuts is the last thing we needed.”

Still, while the cuts may be bad news in the short-term, they might also speed a recovery in the tanker market when the time comes, he said.

Global oil stockpiles could end up falling by 4.1 million barrels a day in the first quarter, according to Citigroup Inc. The faster and more severely OPEC+ tightens oil supply, the more urgently oil refineries may need crude as economies ease restrictions to combat the spread of Covid-19. And that would ultimately mean more cargoes.

“In the end, both oil and tanker markets will need volume to increase,” Barstad said.