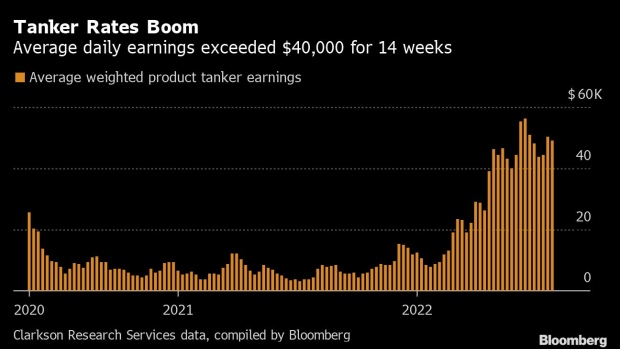 (Bloomberg) -- Tankers hauling everything from diesel to gasoline are experiencing a period of strength not seen in at least 25 years, buoyed by robust demand for fuels and stretched sailing distances after Russia’s invasion of Ukraine.

So-called product tankers have earned more than $40,000 a day for the past 14 weeks, a feat not achieved in data that began at the start of 1997, according to figures from Clarkson Research Services Ltd., a unit of the world’s largest shipbroker.

Disruption to trading routes since Russian forces attacked Ukraine in late February caused oil prices to soar this year. While crude prices have begun to fall back amid growing fears of a recession, for now, fuel tankers have benefited from one of the tightest refined product markets on record. Analysts say a further warping of Russian flows could add to the surge later this year.

“We’re in a new paradigm where rates will be stronger,” said Omar Nokta, lead shipping researcher at Jefferies LLC. “I’d say high refining margins are going to continue to keep refining activity high, and so that will keep rates elevated.”

Sanctions against Russian oil supplies due to come into force later this year are likely to tighten the product market even more, providing additional support to tanker rates, Nokta added.

Monaco-based shipper Scorpio Tankers Inc. reported its largest quarterly profit ever last month. Increased global refined product demand and lowered refining capacity have triggered a surge in seaborne exports, while there’s been an increase in so-called ton miles, a demand measure that multiplies the amount of cargo by how far it gets shipped.

Scorpio President Robert Bugbee noted in an earnings call that rates weren’t this robust even when demand slumped in 2020 due to the pandemic and traders rushed to store fuel on ships at sea, adding that “we haven’t seen this since 2004, ‘05, ‘06.”

Several other owners are set to report earnings later this month. On Monday analysts at Pareto Securities said Hafnia Ltd. will post a strong second quarter report “but that is nothing compared with what is ahead.” Evercore ISI upgraded TORM Plc late last month and said Ardmore Shipping Corp. and Scorpio could all see “material upside” despite earlier price gains.

The buoyant market isn’t just confined to oil product tankers. Those hauling crude have also been rising steadily in recent weeks after more than 18 months of loss-making business. On Friday, a gauge that averages earnings for supertankers showed they were positive for the first time since January 2021.