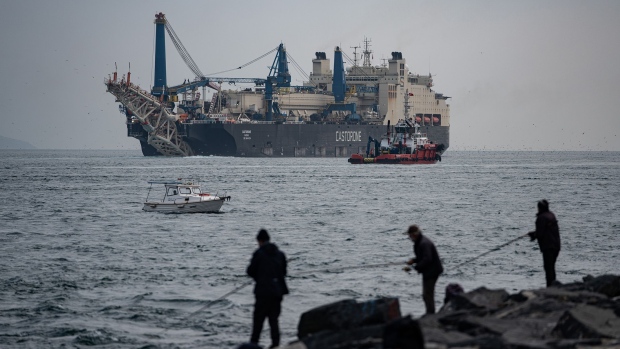 The ship "Castorone", which is working to deliver the natural gas in the Black Sea to land, moored as traffic passing through the Bosphorus Strait was closed on Dec. 1, 2022. , Photographer: Cemal Yurttas/dia images/Getty Images Europe

(Bloomberg) -- The snarl-up that’s delayed millions of barrels of oil near Turkey’s key shipping straits is already spiraling into an enormous and contentious bill for the waiting time.

Based on the delays of tankers currently near the Bosphorus and Dardanelles straits, about $13 million of extra freight costs have been incurred by the ships because they can’t currently pass through. Day rates for waiting have been around the $100,000 or more in recent weeks, according to shipbrokers, owners and traders.

So far, about 26 tankers have been unable to pass through the straits after Ankara imposed a new rule requiring owners to provide proof their ships are insured for transit, tracking data compiled by Bloomberg show. Turkey estimates a smaller number.

Turkey said the move was due to a G-7 and European Union price cap on Russian oil that made it hard to check whether cargoes would be covered. It said Thursday that the number of ships waiting to transit shouldn’t be used a a pressure point to change its rules. Insurers, for their part, are worried about making such guarantees for individual parts of voyages.

In general, shipping charters contain provisions for the payment something called demurrage — effectively a waiting cost — when ships get stuck.

Whether the companies hiring the tankers will pay it this time isn’t certain. At least one owner with a vessel in the queue has already been informed by charterer that they don’t intend to pay, according to correspondence seen by Bloomberg.

If they don’t pay, not only would the ships spend days of earning nothing, they also face a huge missed-earnings opportunities. Suezmax oil tankers are currently earning about $115,000 a day on the global market.