Traders piled into options that oil could surge even further after rising to the highest since 2008, with some even placing low-cost bets that futures surpass US$200 before the end of March.

Prices to buy call options at higher prices surged Monday as the market assessed the possibility of a supply cut-off from Russia, one of the world’s biggest exporters. More than 1,200 contracts for the option to buy May Brent futures at US$200 a barrel traded on Monday, according to ICE Futures Europe data. The options expire March 28, three days before the contract settles. The price to buy them jumped 152 per cent to US$2.39 a barrel.

A US$150-a-barrel call option for the June Brent contract doubled from Friday, according to ICE, while the cost of US$180 call options jumped 110 per cent. The front-month May contract for Brent surged dramatically early on Monday as traders panicked over talks of a Russian crude ban amid Libyan supply disruptions and delays to expected progress in Iranian nuclear talks. 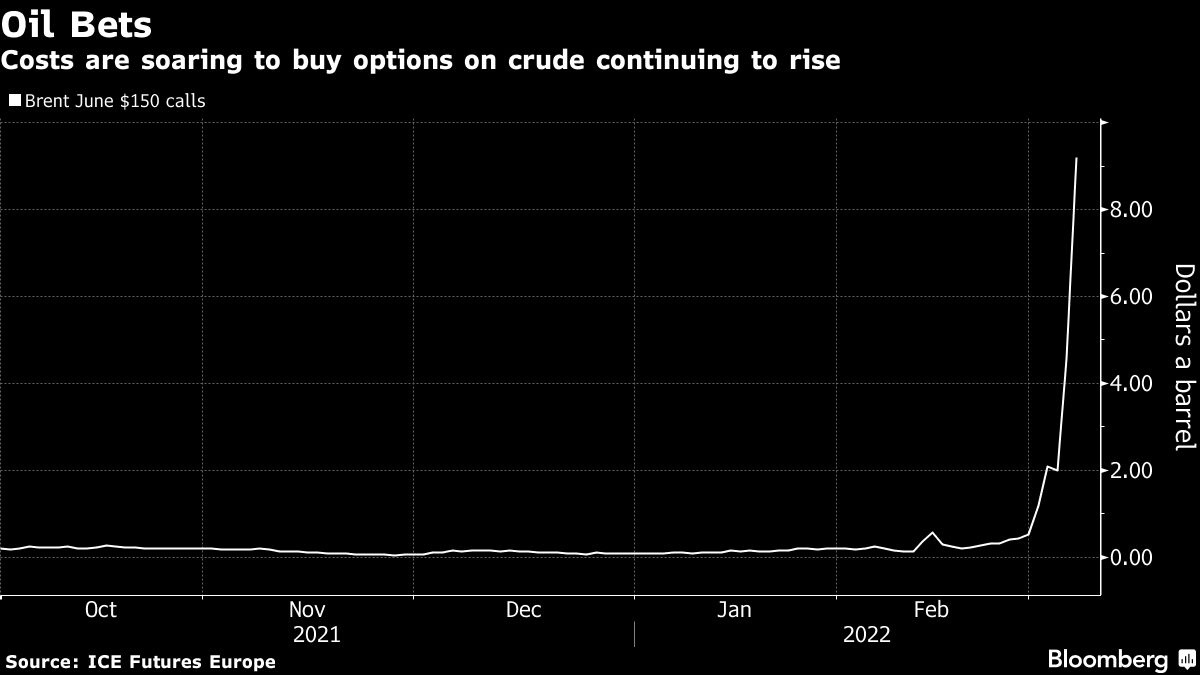 JPMorgan Chase & Co said last week that Brent crude could end the year at US$185 a barrel should Russian supplies continue to be disrupted, while Australia & New Zealand Banking Group Ltd. saw around 5 million barrels a day of pipeline and seaborne oil supplies being impacted by new sanctions.

Russia is the world’s third-largest oil producer behind the U.S. and Saudi Arabia. The OPEC+ member exported 7.8 million barrels a day of crude, condensate and oil products in December last year, according to the International Energy Agency, supplying key fuels such as diesel, fuel oil, vacuum gasoil and a petrochemical feedstock known as naphtha to buyers across Europe, the U.S. and Asia.