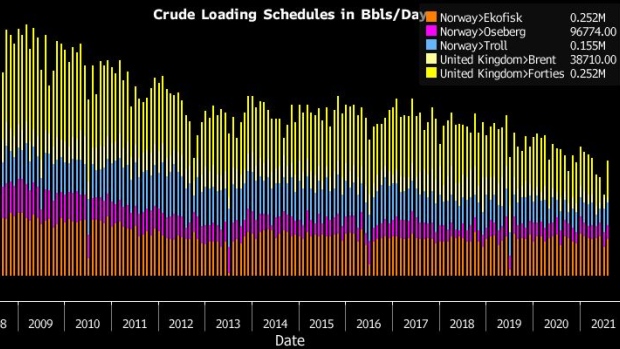 An oil tanker is anchored near the Port of Long Beach, California, U.S., on Thursday, Dec. 31, 2009. A surplus of idled oil tankers, which would stretch 26 miles if lined up end to end, may signal a 25 percent slump in freight rates this year. The ships will unload 26 percent of the crude and oil products they are storing in six months, adding to vessel supply and pushing rates for supertankers down to an average of $30,000 a day, compared with $40,212 now. , Photographer: Bloomberg/Bloomberg

(Bloomberg) -- Here’s something for oil bulls to chew on as Brent crude trades near $72: tankers are holding several million barrels of oil in the North Sea in what is normally a strongly bearish indicator.

Five tankers carrying about 6 million barrels of North Sea crude have been floating off European shores for two to three weeks, according to ship tracking data compiled by Bloomberg. As the current market structure doesn’t make economic sense for storage, the increase in floating barrels looks like a sign of weak demand, especially from Asia.

And supply is poised to rise. Loadings of five benchmark North Sea grades will increase by about 40% in July after the completion of maintenance in a major pipeline in mid-June.

Cargoes on board the five tankers include 5.4 million barrels of Forties crude, which is typically shipped to Asia, especially China’s so-called “teapot” private refiners. The teapots have recently held back on purchases, partly because they have been waiting for the release of a second batch of government-issued import quotas for 2021.

Two very large crude carriers, both chartered by Vitol Group, are among the five tankers floating offshore Europe. Elandra Everest completed a series of ship-to-ship transfers with four Aframax-class vessels off Southwold, England on May 6-12 and have been floating at the site since then. Apollonas has been floating off Hound Point, Scotland since mid-May after loading about 2 million barrels of Forties at the terminal.

Bidding activities for North Sea grades, which dominated the market a month ago, have dropped significantly since the new trading cycle of July-loading cargoes started last week, according to traders monitoring the pricing window of S&P Global Platts. Brent, Forties, Oseberg, Ekofisk and Troll are a basket of grades used to set Dated Brent, a benchmark for two-thirds of the world’s physical crude transactions.