Global oil shipping was thrown into disarray after the U.S. imposed penalties on a handful of Chinese tanker firms for continuing to carry Iranian crude after sanctions waivers lapsed in May.

Four shipping companies including a unit of COSCO Shipping Corp. were charged with knowingly violating restrictions on handling and transacting Iranian petroleum, with additional sanctions placed against executives and two other companies that control the firms, according to statements from the U.S. Treasury and State Departments.

Oil traders in Asia scrambled to respond, cancelling bookings with sanctioned entities and letting provisional charters lapse as they attempted to avoid being drawn into the stand-off between Washington and Tehran. The penalties bar U.S. citizens and companies from dealing with the firms, effectively blocking them from American banks at the heart of the global financial system. 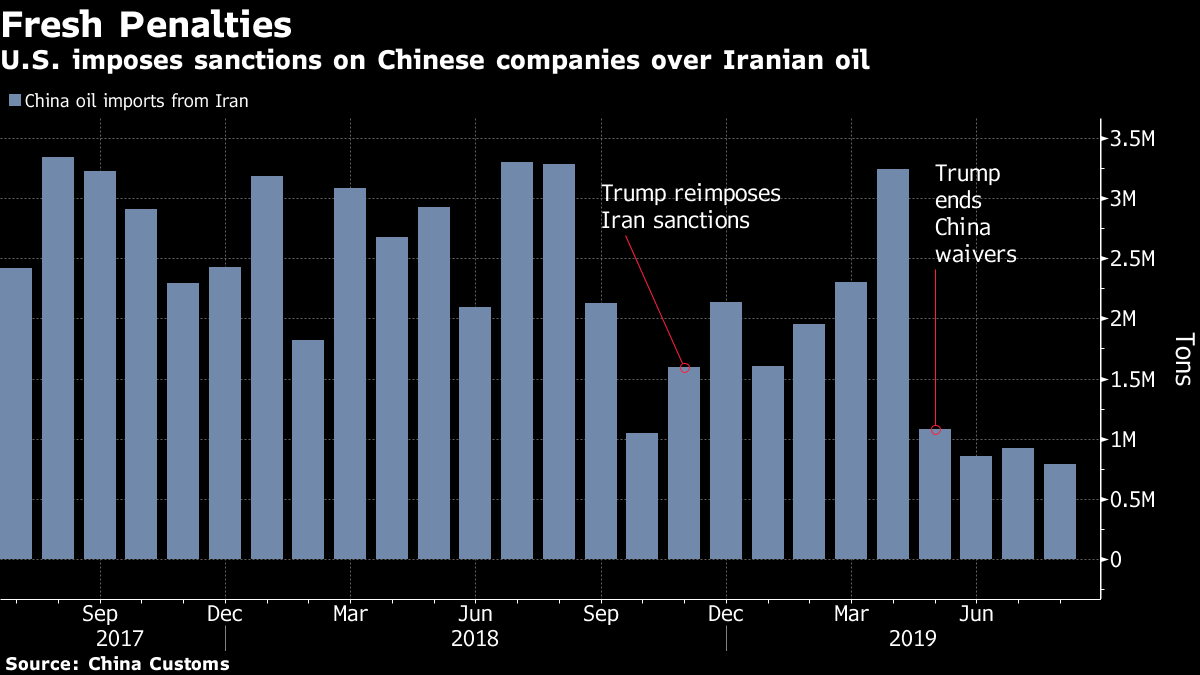 The White House’s announcement also raised uncertainty among shippers on whether cargoes that have already been loaded onto the vessels of sanctioned firms would be allowed to deliver, or whether they would have to transfer their loads to unsanctioned tankers.

“The sanctions this time are more direct and will have an immediate effect on anyone chartering sanctioned tonnage,” said John Driscoll, chief strategist at JTD Energy Service Pte. “These latest moves are likely to add more inconvenience and result in higher costs. Anyone time-chartering tonnage from a sanctioned owner better have a Plan B.”

The sanctions could also complicate talks to end the U.S.-China trade war, which are set to resume in Washington next month. China, the world’s largest crude buyer, continues to import relatively small amounts of oil and petroleum products from Iran despite the White House blocking such purchases in May.

“This is one of the largest sanctions actions the United States has taken against entities and individuals identified as transporting Iranian oil since our sanctions were re-imposed in November 2018,” Secretary of State Michael Pompeo said in a statement.

China firmly opposes the penalties against its companies and citizens, and has consistently disagreed with U.S. implementation of unilateral sanctions, foreign ministry spokesman Geng Shuang said at a media briefing.

“The U.S. disregards the legitimate rights and interests of all parties and arbitrarily wields the stick of sanctions,” he said. “It is a gross violation of the basic norms of international relations.”

China Concord Petroleum Co., Kunlun Shipping Co., Pegasus 88 Ltd., and COSCO Shipping Tanker (Dalian) Seaman & Ship Management Co. have been charged with knowingly violating restrictions on handling and transacting Iranian petroleum. Additional restrictions were also imposed on five executives at the companies, as well as Kunlun Holding Co. and COSCO Shipping Tanker (Dalian) Co., which own or control one or more of the sanctioned entities.

Today, U.S. imposed new sanctions against Chinese companies that transported Iranian oil contrary to U.S. sanctions, denying the #Iran regime revenues for destabilizing conduct at the expense of the Iranian people. We will take action on any sanctionable Iranian oil transaction.

The COSCO Dalian entity is 100 per cent owned by COSCO Shipping Energy Transportation Co., which is a subsidiary of COSCO Shipping, the world’s second-largest shipping company by container fleet size, according to Bloomberg Intelligence. COSCO Dalian owns or operates anywhere from about 20 to 50 petroleum tankers worldwide, according to estimates from industry sources. Vessel ownership can be an opaque corner of the global shipping market.

The parents and other subsidiaries of COSCO Dalian are not affected by the sanctions, the Treasury Department said. COSCO Shipping Energy halted trading in Hong Kong on Thursday after the announcement.

The companies did not immediately respond or declined to comment.

Several oil tankers owned by the COSCO Dalian unit had their bookings canceled, while others saw provisional charters fall through, according to shipbrokers and charterers who asked not to be identified as they aren’t authorized to speak to the media.

The sanctions are aimed at denying the Iranian regime critical income to engage in foreign conflicts, advance its ballistic missile development, and fund terrorism around the world, Pompeo said. These penalties are due to the transport of Iranian crude oil, and the U.S. is similarly concerned about the export of Iranian refined petroleum products, he said.

This isn’t the first time Kunlun Holding and Kunlun Shipping have been involved with Iran-related transactions. Last month, the companies were linked to several seized tankers in Singapore, after a bank sought to take over the vessels due to suspicion that their owners appeared to breach U.S. sanctions, leading to a loan default.

In July, the U.S. sanctioned Chinese state oil trader Zhuhai Zhenrong Co., a secretive company with links to the Chinese military. The company has a history of taking Iranian crude and fuel, at times as part of barter deals for goods or services, and then selling it on to refiners in China.