The summer driving season is going to be a monster for crude oil demand: Prestige Economics

Oil fell Thursday even as the futures curve continued to signal one of the strongest periods the market has ever seen amid ongoing price volatility.

Futures in New York closed 2 per cent lower. Geopolitical risks, including the potential return of Iranian barrels and political tension around Ukraine, have kept prices swinging throughout the week. That volatility has rippled across the market’s forward structure.

Nearby contracts are commanding enormous premiums over those further out, indicating that traders are clamoring for barrels right now. Some futures spreads have reached their strongest levels in data going back to 2007.

Nowhere is the move clearer than in the world’s most important physical oil price -- Dated Brent -- which on Wednesday topped US$100 for the first time since 2014. The market for real barrels in the North Sea has boomed in recent weeks, with differentials for some physical cargoes hitting the highest on record as demand from European refiners surges.

“The strength in Dated Brent clearly suggests refiners are out procuring short-haul barrels,” Energy Aspects analysts including Amrita Sen wrote in a note to clients this week. “The only way to balance this market over the medium term remains high oil prices to slow demand growth.” 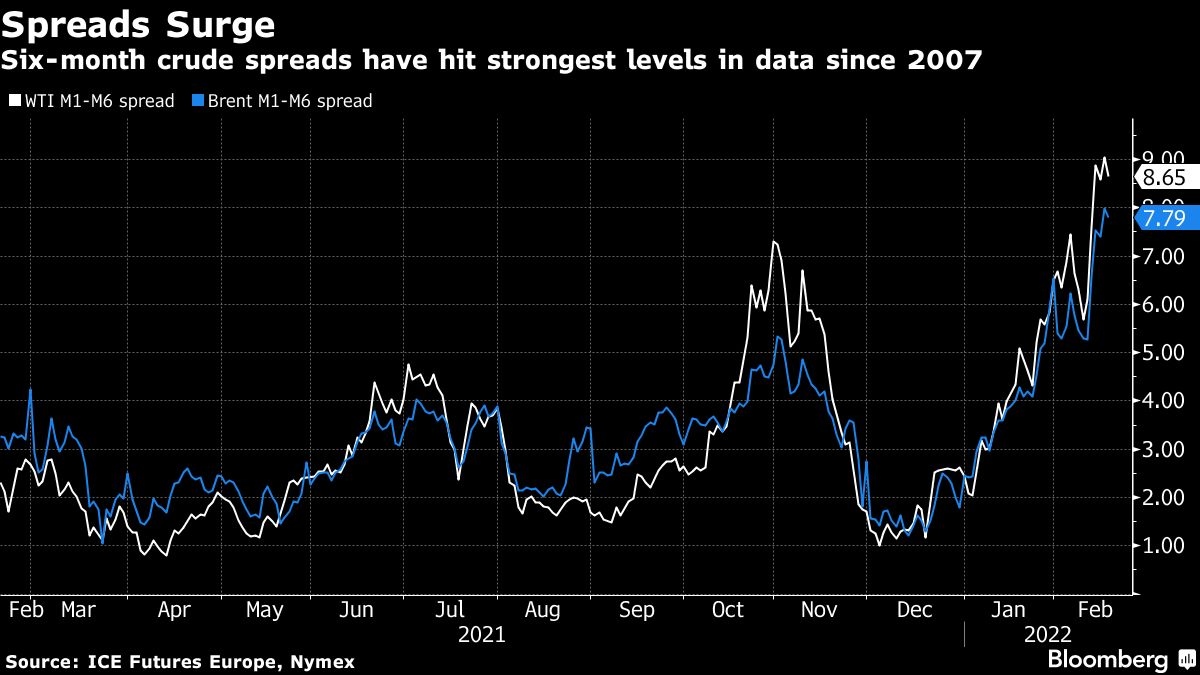 In the U.S., stockpiles at the key hub of Cushing, Oklahoma are at their lowest since 2018, spurring tightness in West Texas Intermediate crude.

Last week, the International Energy Agency boosted its historical demand numbers, offering the latest indication that consumption has been running ahead of expectations. While most forecasting agencies had expected global oil stockpiles to rise markedly in the early part of the year, that has so far failed to materialize.

“Price action since just before Christmas has been an incredibly bullish one-way street,” said Bjarne Schieldrop, chief commodities analyst at SEB AB. “You don’t see that unless market is very, very tight.”

There are still some risks, however. Oil product cracks -- the money refiners make from turning crude into refined products -- have eased in recent days. The diesel cracks in Europe and the U.S. are down about 6 per cent over the past two days, the first sign that refiners could be struggling under pressure from high prices.

The moves in headline prices in recent days have been driven by two of the market’s biggest geopolitical risks -- the potential return of Iranian barrels to the market and political tension around Ukraine.

On Thursday, U.S. President Joe Biden said the probability of a Russian invasion of Ukraine remains “very high” and U.S. Secretary of State Antony Blinken is proposing he meet his Russian counterpart Sergei Lavrov next week as tensions rise again.

Russia has repeatedly denied plans to invade Ukraine, and the nation’s defense ministry has said that troops are returning to their bases in recent days. A potential invasion of Ukraine is adding risk premium to oil markets, as Biden has said the U.S. is ready to respond to a Russian attack with economic sanctions.

Some price support from a potential invasion is being tempered by the possibility of an Iranian nuclear deal. Lifting sanctions on Iran’s oil exports would be a later phase of agreement to restore 2015 nuclear deal, Reuters reported.