Oil extended the worst start to a year since 1991 after China’s oil consumption was said to plunge by 20 per cent amid efforts to control the spread of coronavirus.

Futures in New York sank to the lowest levels in a year on Monday as oil demand in the world’s biggest importer dropped by around 3 million barrels a day, according to people with inside knowledge of the country’s energy industry. West Texas Intermediate and Brent forward curves weakened sharply -- with Brent flipping to contango for the first time since July -- further signaling slack demand for crude.

The outbreak threatens what could be the largest demand shock since the global financial crisis. The effects are starting to ripple around the globe, as some Chinese refineries slow down or halt operations and cargoes of West African oil are being resold. OPEC and its allies are considering an emergency meeting to discuss deeper crude production cuts in an effort to stabilize prices.

“The demand story is focused on China and we’ve broken past oil’s psychological levels,” said Bill Farren-Price, a director at consultants RS Energy Group. “The danger is that the trajectory of the problem is not fully understood.” 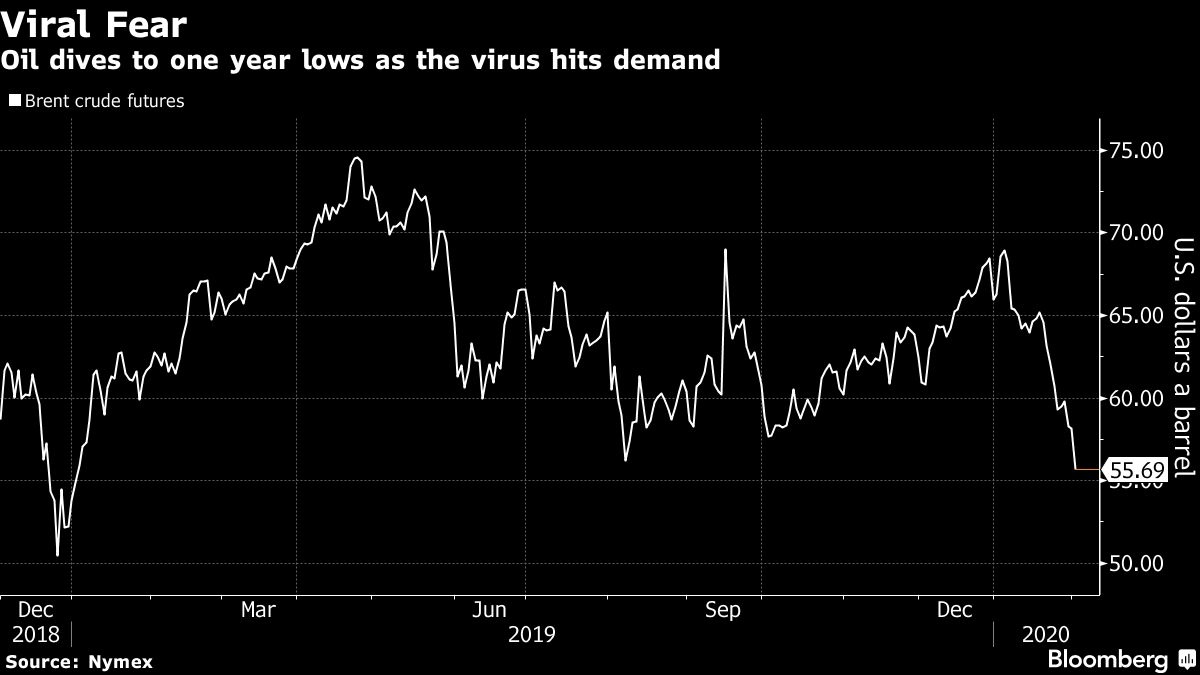 Beijing has locked millions of people in quarantine and the New Year holiday has been extended. Flights have been canceled and authorities across the globe are trying to contain the virus’s spread. Traditionally during the New Year holiday, gasoline and jet-fuel demand increase as hundred of millions go back home, while gasoil consumption drops as industrial activity slows.

Business activity in China is expected to decline, prompting Beijing to consider seeking flexibility on its trade deal with the U.S. that’s supposed to take effect this month, according to people familiar with the matter. The U.S. Centers for Disease Control and Prevention says it’s preparing for the disease to become a pandemic and is working to get emergency approval for a test for the virus, which has almost 17,400 confirmed cases and claimed over 360 lives.

Russian President Vladimir Putin and Saudi King Salman bin Abdulaziz spoke by phone and confirmed their readiness to continue cooperation to keep the global oil market stable, the Kremlin said in a statement.

Citigroup Inc. slashed its price forecasts for across commodities as it said the impact of the coronavirus looks much worse than it initially thought.

Chinese government measures amount to a “major shutdown of the economy” and even with a deeper OPEC+ production cut it will drive weaker oil balances, Ed Morse, the global head of commodities research, said in a note. “There would be critical knock-on indirect effects for all commodities.”

West Texas Intermediate for March delivery fell US$1.45 to settle at US$50.11 a barrel at on the New York Mercantile Exchange, sinking as low as US$49.91 during the session.

Brent for April delivery fell US$2.17 to US$54.45 a barrel on the London-based ICE Futures Europe exchange. Both benchmarks settled more than 20 per cent below their recent highs, the common definition of a bear market.

Chinese refineries are storing unsold petroleum products such as gasoline and jet fuel, according to the executives. But stockpiles are growing every day, and some refineries may soon reach their storage limits. If that were to happen, they would have to cut the amount of crude they process. One executive said that refinery runs were likely to be cut soon by 15-20 per cent.

The coronavirus is the latest blow to the U.S. shale industry that has struggled to stay profitable.

“There is no doubt these moves lower will be painful,“ says Robbie Fraser, senior commodities analyst at Summit Energy Service. Investors can expect to see lower rig counts and new well completions decline as producers adapt to the price pressures, “but it won’t happen quickly, which is why we see so much near-term downside risk from current conditions, and a more volatile year ahead,“ he said.