Oil closed lower for a second day after the US Department of Energy announced it’s offering to sell up to 40.1 million barrels of crude as part of President Biden’s March announcement to release in stages one million barrels of oil per day for six months.

West Texas Intermediate futures settled just below US$110 a barrel, the lowest level in nearly a week, after the DOE said it will release as much as 39 million barrels of sour crude for supply during July 1-August 15, according to a statement. The remaining 1.1 million would be sweet crude for June 21-30 supply, it said.

“Movements in oil have become more subdued,” said Alex Kuptsikevich, senior market analyst at FxPro. “It will take a meaningful, bullish driver for quotes to manage to consolidate above this area this time.” 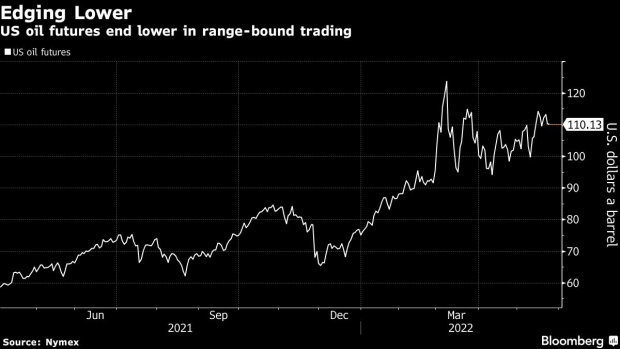 Oil has traded in a narrow range around US$110 a barrel over the past two weeks as investors weigh the fallout from the war in Ukraine, including Hungary’s opposition to a European Union ban on Russian crude, and the outlook for global economic growth. While American oil consumption is expected to pick up further over a busy summer-driving season, energy usage in China has been crimped by the harsh lockdowns imposed in key cities to combat coronavirus outbreaks.

Separately, WTI’s discount to Brent widened to US$3.79 a barrel, after tightening to a six-month low last week.

Still, there’s a continuing premium for low-sulfur, low-density crude supplies amid robust global demand and constrained output. Prices in Europe have already soared as shipments from the North Sea and Libya are disrupted, further complicating efforts to replace Russian barrels. The strength is now spilling over into Asia, where a cargo of Malaysian light-sweet Labuan crude fetched a hefty premium of US$12 a barrel.