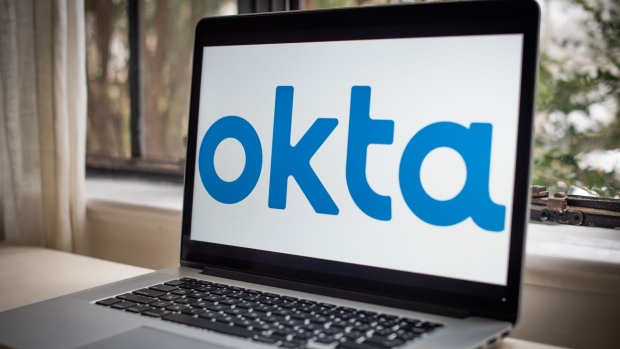 (Bloomberg) -- Okta Inc., an identity-verification software maker whose business got a dramatic boost from the shift to remote work during the pandemic, projected sales will grow 30% in each of the next three years.

Revenue at the end of fiscal 2024 will be close to an annualized $2 billion, or about $500 million for the fourth quarter that year, Chief Executive Officer Todd McKinnon said in an interview. The company, which last month agreed to buy Auth0 for about $6.5 billion, is interested in additional acquisitions, McKinnon said, but will achieve that growth rate without any more deals.

Demand for the software maker’s products, which help workers access corporate systems and consumers authenticate their identity online, has increased as more employees logged on from home during the past year. For the 12 months through March 1, Okta was used more than 52 billion times to log into an app or website, almost 200% growth from the same period a year earlier.

The company’s shares more than doubled last year, making McKinnon a billionaire on paper. But since hitting a record high on Feb. 12, the stock has declined 22% through Tuesday’s close with investors leery that the company may not be able to maintain its momentum.

McKinnon said some investors were disappointed in the fiscal year 2022 forecast and thought the company paid too much for Auth0. He doesn’t agree with either concern. Okta last month said annual revenue would be as much as $1.09 billion while its adjusted loss would be 44 cents to 49 cents a share.

The San Francisco-based company said Wednesday it will enter two markets with new products. One, Identity Governance Administration, generates reports after the fact that detail who in an organization has permission to see which parts of its systems. The idea is to make sure people who’ve left the company or have changed roles don’t retain access to unauthorized areas. The second, Privileged Access Management, governs who can view and change an organization’s critical systems. The new areas expand the size of Okta’s potential markets to about $80 billion, the company calculates.

McKinnon said these protections have become more critical as employees continue to work for home and global companies and governments are roiled by sophisticated cyber-attacks like that involving SolarWinds Corp.

“A lot of these data breaches come down to server accounts that weren’t locked down when they should have been — admins changed jobs or left the company,” McKinnon said. “If it wasn’t the cause of the breach, it was a vector that the attackers used once they got in.”

In the newer markets, Okta said it will compete with SailPoint Technologies and CyberArk. Both new Okta products will be available in the first quarter of next year.

Though Okta, with a market value of about $30 billion, is dogged by persistent rumors it might sell to a larger tech company, McKinnon said he wants it to be one of five or six independent software clouds that every company needs. The same way customers turn to Amazon.com Inc. or Microsoft Corp. for their cloud infrastructure, or Salesforce.com Inc. for business application cloud needs, McKinnon wants identity and access to remain Okta’s specialty rather than being subsumed into one of the other categories. Microsoft, which has identity software products that predate its cloud businesses, is already Okta’s main rival.

“It really is such an important driver of choice in technology,” he said of having independent identity cloud software. If a customer uses Microsoft for identity management, they’ll be pushed towards Microsoft's Azure cloud and the software won’t work as well with Microsoft rivals like Zoom Video Communications Inc. and Slack Technologies Inc., he said. “This neutrality is more important than ever.”