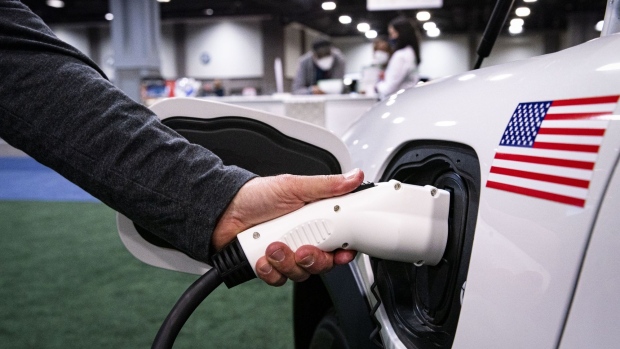 An exhibitor demonstrates plugging in a charging port for a Ford Motor Co. Mustang during the Washington Auto Show on Jan. 21, 2022. , Bloomberg

(Bloomberg) -- Baby Boomers could provide legacy automakers an advantage as they ramp up competition with Tesla Inc. in the electric vehicle market, according to a recent poll conducted by Morning Consult.

In the survey of 2,200 U.S. adults, 38 percent of those born between 1946 and 1964 said they would prefer to buy an EV from a company that traditionally has produced gas-powered cars, while only 12 percent said they would prefer a manufacturer that offers only electric options. The survey showed a generational divide in the EV market, with both Baby Boomers and members of Generation X leaning toward legacy automakers, while Millennials and Gen Z preferred pure-play electric manufacturers:

“From a traditional automaker’s perspective, older buyers are a great audience,” said Morning Consult’s auto and mobility analyst Lisa Whalen. “They tend to be more loyal and it’s a big base of buyers.”

Morning Consult gave respondents a third option for their hypothetical purchase: a big tech company such as Amazon.com Inc. Only five percent said they would prefer to get an EV this way, suggesting that if Apple Inc. does  produce a car, it will have a long way to go in gaining consumer confidence.

The research also reveals that many Americans are eager for EVs to overtake combustion engines, with 19 percent of respondents saying that “excited” best describes their feelings about a future with predominantly electric vehicles. Still, carmakers have fears to overcome, with 14 percent reporting feeling “anxious” about the prospect.

“Just because you say it and you build it doesn't mean they're going to come,” said Whalen.