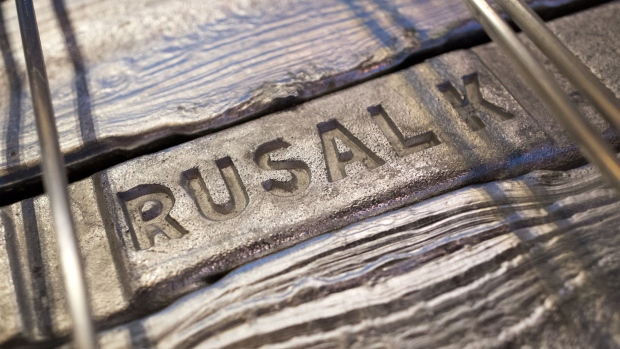 (Bloomberg) -- European officials have provided information to the U.S. government indicating that Russian billionaire Oleg Deripaska continued to exert control this year over United Co. Rusal International PJSC, which the officials say was a breach of a U.S. sanctions agreement reached in 2018.

An assessment sent to U.S. officials earlier this year concluded that Deripaska retained significant day-to-day influence over Rusal, one of the world’s largest aluminum producers, and its parent, EN+ Group International PJSC, according to the officials. He used company resources and employees to support his personal business interests and the political agenda of the Kremlin around the world, they said.

Such activities could run afoul of an agreement reached in late 2018 between the U.S. and EN+, Rusal and another company founded by Deripaska. The deal called for the oligarch, who is under personal U.S. sanctions, to reduce his ownership and relinquish control of those operations as a condition for the U.S. lifting sanctions against the companies.

The officials said they shared information that the Russian oligarch directed executives at Rusal and EN+ to press western governments and multilateral institutions to block Chinese aluminum from flooding foreign markets early this year. They also alerted U.S. officials of their findings that Deripaska personally oversaw a media campaign led by company executives to undermine China’s reputation in Africa, they said.

Any review of the U.S. government’s Russia sanctions could become politically contentious for President-elect Joe Biden and his nominee for Treasury secretary, Janet Yellen. Congressional Democrats criticized the deal that lifted sanctions on Deripaska’s companies last year. A Senate Intelligence Committee report released in August described Deripaska as a proxy for the Russian state and its intelligence services.

Officials on both sides of the Atlantic confirmed that the information was shared with U.S. government agencies, which declined to comment on queries from Bloomberg News. U.S. officials are aware of Deripaska’s past activities and continue to assess compliance with the agreement, a person familiar with the matter said.

It would ultimately be up to the U.S. Treasury, which enforces sanctions, to determine whether the companies breached their agreement with it. A Treasury spokesman declined to comment or say whether the activities outlined by European officials would have constituted a violation of the sanctions-relief deal.

The law firm Schillings, which represents Rusal parent company EN+ and its executive chairman Greg Barker, said the allegations have no basis in fact. It is false, the firm wrote, to suggest Deripaska controls EN+, influences day-to-day operations or allows its resources or its employees to support his personal business interests.

Lawyers for Deripaska said the European officials’ allegations aren’t true. Deripaska “has supported the removal of En+ & Rusal from sanctions and taken all requested steps in relation to the same, and at all times has complied with his commitments made related thereto,” said U.K. lawyer Paul Tweed.

The Trump administration’s blacklisting of Deripaska roiled metals markets and prompted the U.S. Treasury to rethink one of its highest-profile moves against Russia.

The U.S. sanctioned him and six other Russian oligarchs in April 2018 for their roles in supporting what Treasury Secretary Steven Mnuchin called the Kremlin’s “malign activity around the globe,” including the occupation of Crimea, support for the Syrian regime of Bashar al-Assad and attempts to subvert Western democracies. The U.S. said it was targeting Deripaska for acting or purporting to act on the Russian government’s behalf and for operating in the country’s energy sector.

Along with the individual measures, the U.S. sanctioned several Deripaska companies, citing the Russian’s ultimate control of them. Those companies included EN+ and its Rusal unit, as well as an EN+ energy unit.

Although the U.S. has announced measures against some of Russia’s wealthiest and politically connected billionaires, few of those moves had the impact of the actions against Deripaska. Sanctioning Rusal, the world’s largest aluminum producer outside of China, sparked concerns of a global shortage. Prices of aluminum, used in everything from food packaging to airplanes, rose almost 40% in the two weeks after the U.S. sanctions on Rusal.

Over eight months in 2018, Barker, who at the time was the chairman of EN+ and a member of the U.K. House of Lords, negotiated a complex and unprecedented deal with the U.S. Treasury to lift the sanctions on En+, Rusal and the energy unit. Barker hired advisers and lobbyists to push the Trump administration and members of Congress to remove the penalties. Peers in the House of Lords, whose duties can be part-time, commonly have outside business interests.

The U.S. Treasury’s deal that lifted sanctions on the three companies reduced the sanctioned oligarch’s direct and indirect shareholdings to below 50 percent. The agreement called for new independent directors to be appointed to the boards EN+ and Rusal.

Under the plan, the companies agreed to not act in any manner that “directly or indirectly provides Deripaska with the ability to exercise a controlling influence over management or policies” of EN+ or Rusal, according to a U.S. Treasury letter to Congress in December 2018.

“These companies have committed to significantly diminish Deripaska’s ownership and sever his control,” Mnuchin said in December 2018 when he announced the decision to lift the sanctions. “The companies will be subject to ongoing compliance and will face severe consequences if they fail to comply.”

Congressional Democrats objected to the deal, citing concerns about the motivations of the Trump Administration which at the time was battling Special Counsel Robert Mueller’s probe into Russian meddling in the 2016 U.S. election. Deripaska’s name had emerged in press reports about the Russia investigation and in Mueller’s final report; he denied playing any role in election interference.

Senate Democratic Leader Chuck Schumer, joined by Sherrod Brown of Ohio and Robert Menendez of New Jersey, said at the time that the decision to lift the restrictions “raises key questions that the administration will need to answer about whether the structural and governance changes made by these companies are sufficient to ensure that Deripaska is no longer in the driver’s seat.”

When Barker announced the agreement, dubbed the Barker plan, he acknowledged it wasn’t perfect. “I am not pretending that Deripaska is removed from the company altogether, but we have removed control,” he told Bloomberg Television in an interview in January 2019.

The next month, Barker became executive chairman of EN+ and took a leave of absence from the House of Lords, where he remains a non-voting member. He was paid $7.8 million by EN+ last year, including what the company called a “discretionary bonus” of $5.9 million.

The information passed to the U.S. raises questions about compliance with the U.S. Treasury’s deal. It characterized Deripaska as very much in the driver’s seat at Rusal. EN+ and Rusal executives took instructions from Deripaska on important strategic issues, including directives related to China, according to the European officials, who spoke on the condition of anonymity because they were not authorized to speak with the media.

They said that early this year, Deripaska asked a company executive to put pressure on the U.S. and U.K. governments to stop China from flooding foreign markets with aluminum. According to these people, Deripaska said Russia couldn’t publicly call out Beijing because it needed medical supplies from the country to battle the Covid-19 pandemic. The impact of any such efforts isn’t clear, with many western aluminum producers also criticizing Chinese aluminum exports and the pandemic ultimately tamping down global demand.

The oligarch has also recently steered Rusal’s tactics in other key markets, the people said. In early April, they said, he gave orders to top Rusal officials to oversee a disinformation campaign against China in Guinea, an important source of bauxite for Rusal’s aluminum production. Deripaska sought to undermine Beijing’s position in the country, already weakened by the pandemic, while bolstering Russia’s standing, the officials said. They pointed to published stories, videos and social media posts that highlighted alleged Chinese xenophobic attitudes toward Africans, saying Deripaska guided the media campaign through an intermediary and demanded updates on it throughout April.

They also said Deripaska helped reignite a campaign against billionaire Vladimir Potanin, a long-time rival. The trigger was an oil spill in Siberia in late May by MMC Norilsk Nickel PJSC, where Potanin is the biggest shareholder. Rusal, the second-largest investor, demanded that Potanin change the management team. “What is happening at Norilsk Nickel makes us wonder whether the management is competent and capable to run the company,” the company said in July. Deripaska directed Rusal employees to mount the campaign, according to the officials.

Schillings said any allegations that EN+ executives were directed by Deripaska to block Chinese aluminum from western markets, encourage disinformation in Africa or mount a campaign against Potanin are false. It said EN+ maintains a “robust corporate governance structure.”

“The EN+ group is also subject to a scrupulous and continuous compliance assessment regime by independent international auditors, with unfettered access, who report to the U.S. Treasury Department. At no point have any of your allegations been raised by either the auditors or the U.S. Treasury,” the firm said.

Deripaska, 52, was once Russia’s richest man. A physics graduate who served in the Soviet Army, he was one of several oligarchs who built multibillion-dollar mining fortunes in the so-called aluminum wars of the 1990s when tycoons battled for market share as Russia privatized state assets.

He cobbled together a patchwork of smelters and refineries that helped to form Rusal, using debt to expand and running it in a hands-on manner to try to drive efficiencies. He almost lost his fortune in the 2008 financial crisis when commodity prices crashed and he struggled under a mountain of debt. He personally negotiated with Russian and foreign banks and other creditors to restructure his loans.

Deripaska has fought to get off the U.S. sanctions list. In March 2019 he sued the U.S. Treasury to try to get the sanctions lifted, claiming he’d been unfairly targeted and that his net worth had dropped by $7.5 billion as banks withdrew credit and businesses refused to work with him.

Seeking to get the case dismissed, the Treasury’s Office of Foreign Assets Control argued that the sanctions were justified because Deripaska hid what it alleged was money laundering by Russian President Vladimir Putin, according to a letter it sent to Deripaska’s lawyers in January, which also alleged Deripaska financed projects at Putin’s request. Deripaska called the letter, first reported by the Financial Times, a “mish-mash of total nonsense.” In an interview with France’s Les Echos daily, he said the letter contained no facts that could be presented in court. The suit is ongoing.