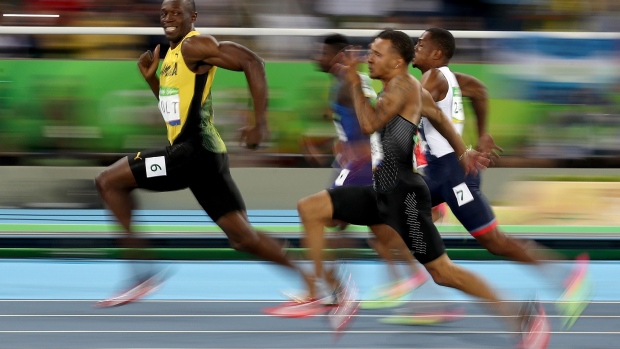 (Bloomberg) -- Olympians are taking advantage of a sponsorship rule change which lets them to capitalize on their social-media followings to promote items such as sports wear and washing detergent during the Tokyo Olympics, but agents say that the complexity of the new guidelines and the International Olympic Committee’s continuing control still prevents athletes from fully realizing their earning potential.

Athletes had until now been prohibited from engaging in personal sponsor promotion during the Olympics, but a change in 2019 by the IOC to a guideline known as Rule 40 has opened the doors for them to post sponsored content and generate another revenue stream. That’s enable athletes such as Portuguese triple jumper Patricia Mamona to tout cereal made by Nestle SA and Taiwanese weightlifter Hsing-chun Kuo to promote telecommunications provider Taiwan Mobile Co Ltd. on their Instagram accounts.

The rule change underscores the shift that is underway in the power dynamics between Olympic organizers and athletes, with many now developing into global brands with enough clout to challenge the dominance of the IOC — particularly in an age when social media is eclipsing television and other traditional media. Agents have also long complained that the old sponsorship rules concentrate power in the hands of the IOC and prevent revenue from trickling down to athletes, particularly those in sports such as weightlifting and badminton who typically make less money than star golfers and soccer players.

The change is “a recognition of the fact that athletes are now a principle source of branding for the Olympics in themselves,” said James Walton, head of Deloitte’s sports business group in Southeast Asia. “The Olympics brand can be improved now by Usain Bolt posting something, whereas 20 years ago, Usain Bolt didn’t have a brand, the Olympics had a brand,” he added, referring to the legendary Jamaican sprinter.

Rule 40 was set up initially to avoid ambush marketing — where businesses that had no connection to the games try to associate with the Olympics to gain exposure — and to protect the official sponsors of the games, according to Bob Dorfman, a sports marketer and creative director at San Francisco-based Baker Street Advertising.

Now, lesser-known brands can take advantage of the Olympics moment to gain visibility. For example, Gap Inc.-owned sportswear brand Athleta, which sponsors Simone Biles, expressed support on social media for the U.S. gymnast after she announced her withdrawal from multiple events — a move that Dorfman and others in the sports industry said would not have been endorsed in previous Olympics.

Gap told Bloomberg that it was following Rule 40 protocol. NordicTrack, a U.S. fitness-equipment company that has posted several social media posts supporting Team USA athletes, said that it couldn’t comment on its marketing activity at this time due to Rule 40.

However, some agents believe that the new Rule 40 is not going to be a gold rush for athletes, because it is unevenly applied across countries by national Olympic committees, deterring potential sponsors who do not want to navigate the complexity.

“It’s de-motivated potential sponsors to start working with athletes, we have experienced this on several occasions,” said Kim Vanderlinden, co-founder of sports management agency We Are Many in Belgium. “It’s still not to an extent where sponsors or potential partners of these athletes have huge possibilities or ways to expose themselves.”

Tight controls still remain on what athletes can post during the period of the games from July 13 to Aug. 10. While they can thank personal sponsors on social media and sign new sponsorship deals during the games, even in the most relaxed interpretations sponsors and athletes have to register and get permission from national Olympic bodies to post content. But they can’t mention the Olympics, national teams or feature the Olympic rings in their posts, unless the brand is an official sponsor of the games or national teams. Athleta, for example, did not explicitly mention the games in its posts about Biles.

The limitations of the rule change are particularly conspicuous at a time when athlete followings on social media are skyrocketing during a zero-spectator Olympics and amid falling TV viewership figures. As of Aug. 4, Olympic athletes have added a combined 49 million followers on Instagram since the games began, according to Facebook Inc.’s CrowdTangle tool.

“They’re trying to make it athlete-friendly, but it’s not,” said John Nubani, a sports agent who represents track and field athletes including the U.S. shot put silver medalist Raven Saunders.

Nubani said Saunders had signed a deal with Reston, Virginia-based government contractor Leidos Holdings Inc. right before the Olympics started as they wanted to support her advocacy for mental health, but “they were pulling their hair out” trying to figure out what kind of press they could or could not do during the Olympics.

IOC spokesman Mark Adams said Rule 40 was necessary because the body redistributes 90% of its income to sports and athletes.

“We need to at some stage protect that, so we have to make sure there isn’t too much contradictory advertising going on,” Adams said. It’s likely there will be a review of the rule process after the Tokyo games to see how it’s worked and if athletes are happy, he added.

Still, those in the sports business are skeptical that Olympics organizers will ever give athletes the freedom they want to engage in sponsorship activities.

“The IOC will loosen things up a little more each games but not that much,” Baker Street’s Dorfman said. “They’re not going to lose the value of these million-dollar official sponsors.”