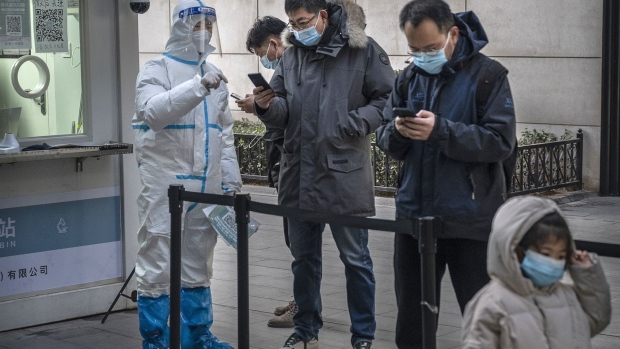 BEIJING, CHINA - JANUARY 17: A health worker wears protective clothing as he helps people register for a nucleic acid test for COVID-19 at a private testing site on January 17, 2022 in Beijing, China. While China has mostly contained the spread of COVID-19 during the pandemic, and even though cases remain relatively low, recent outbreaks of the virus including the emergence of the highly contagious Omicron variant have prompted the government to lockdown nearly 20 million people in various major cities and to reinforce stricter health measures. Mask mandates, mass testing, immunization boosters, quarantines, some travel restrictions and bans and lockdowns have become the norm as China continues to maintain its zero-COVID policy. China's capital city Beijing, has been put on high alert as it prepares to host the Beijing 2022 Winter Olympics and Paralympics which open next month. (Photo by Kevin Frayer/Getty Images) , Photographer: Kevin Frayer/Getty Images AsiaPac

(Bloomberg) -- China halted ticket sales to the general public for the 2022 Winter Olympics and instead will invite groups of spectators to attend the games.

Two former Cathay Pacific Airways Ltd. flight attendants were arrested for violating pandemic rules, Hong Kong police said, after they were identified as the source of the city’s omicron outbreak.

A study from Israel suggests a fourth dose of the Pfizer-BioNTech vaccine would not be significantly effective at preventing the omicron variant of the coronavirus.

Dr. Anthony Fauci, President Joe Biden’s chief medical adviser on the pandemic, said it’s too soon to know whether the rapid spread of the omicron variant will hasten the end of the health crisis. But Pfizer Inc. Chief Executive Officer Albert Bourla said he sees a return to normal life coming soon.

Australia’s Victoria state have declared a so-called “code brown” across all metropolitan and major regional area hospitals as the surge in virus infections strains its healthcare system. The declaration will allow hospitals to shift workers into different roles as needed, cancel leave and increase the number of hospitals caring for infected patients, acting health minister James Merlino told reporters Tuesday.

Authorities expect covid-related hospitalizations to more than double to 2,500 within the next two to four weeks, he said. The state recorded 20,180 new infections and 22 deaths on Tuesday, with 1,152 currently in hospital seeking treatment.

Hong Kong’s expert panel has no objection on the use of Sinovac Biotech Ltd. vaccine in children aged five to 11 and the use of a fractional dose of the BioNTech SE vaccine for adults in children of that age group.

The experts said while both vaccines are expected to lower the risk of severe disease and death, BioNTech may provide better protection against omicron infection, the experts said in a statement on Monday. Inoculating the elderly should take priority, according to the panel.

New rules requiring truckers to show proof of vaccination when crossing the Canada-U.S. border are cutting into shipping capacity and boosting the cost of hauling everything from broccoli to tomatoes.

The cost of transporting produce out of California and Arizona to Canada jumped 25% last week as fewer trucks are available to cross the border, according to George Pitsikoulis, president and chief executive officer of Montreal-based distributor Canadawide Fruits.

The two ex-staffers were charged under Hong Kong’s Prevention and Control of Disease Regulation and are due to appear in court Feb. 9. Until then, they’ve been released on bail. The government has been quick to lay blame at the feet of Cathay, which has struggled under the territory’s shifting quarantine regulations and strict border restrictions, amid a plunge in passenger and cargo traffic.

A fourth dose of the Pfizer-BioNTech vaccine was insufficient to prevent infection with the omicron variant of Covid-19, according to preliminary data from a trial in Israel released Monday.

Two weeks after the start of the trial of 154 medical personnel at the Sheba Medical Center in Tel Aviv, researchers found the vaccine successfully raised antibody levels. But that only offered a partial defense against omicron, according to Gili Regev-Yochay, the trial’s lead researcher.

Vaccines which were more effective against previous variants offer less protection with omicron, she said.

Citing the “current grave and complicated situation” with Covid-19 in China, the organizers of the 2022 Beijing Winter Games halted ticket sales to the general public.

Instead, select groups of spectators will be invited to attend. They’ll be required to obey strict virus precautions before, during and after the event, the official organizing committee said on its website Monday.

The move reverses an earlier decision to limit Olympic ticket sales to attendees from mainland China. The games are scheduled to begin Feb. 4.

The African Union indicated to Moderna Inc. two weeks ago that it does not want the vaccines that the company will have available for them for the second quarter of this year, Moderna Chief Executive Office Stephane Bancel said at a virtual World Economic Forum event.

“What I’m hearing from colleagues on the ground is that low-income countries struggle on how to get those shots in arms,” Bancel said.

“I don’t think the problem is access to doses anymore. It’s really getting those shots into arms and I think we should be able to do more to help low-income countries to get people vaccinated.”

Fauci said it’s too soon to say whether the omicron variant will herald a shift in the Covid-19 pandemic to endemic.

“It’s an open question as to whether or not omicron is going to be the live virus vaccination everyone is hoping for because we have so much variability with new variants emerging,” Fauci said Monday at the World Economic Forum’s Davos Agenda online conference.

The fact that the virus’s mutations appear to be able to evade some immune response through vaccines and infection will make achieving herd immunity difficult, he said.

Angola lifted most Covid-19 restrictions, reopening schools and gymnasiums and allowing restaurants and supermarkets to extend their trading hours.

The country reported 170 new cases on Sunday, down from more than 3,000 a day at the end of last month, the Health Ministry said Monday. The test positivity rate is 13.6%.

The government still requires citizens, including children 12 and older, to get vaccinated to access public places such as schools and state offices. Beaches and public swimming pools remain closed and no tourists are allowed.

France’s parliament adopted a new set of rules that will require proof of vaccination for people to eat in restaurants, attend the theater or get on an airplane.

The changes tighten the so-called health pass that France has had in place for months by removing the option that allowed for a recent negative test. About 80% of France’s total population has received at least one dose of vaccine, according to the health ministry.

The recent surge in cases may have reached a peak, Arnaud Fontanet, a member of the government’s scientific advisory board said on France Info radio. France recorded 278,129 cases on Sunday, the lowest figure in six days and below the level reported the prior Sunday.

The International Labor Organization downgraded its employment forecast, projecting a world shortfall of 52 million full-time jobs in 2022 relative to the fourth quarter of 2019.

The global unemployment rate is expected to remain above pre-pandemic levels until at least 2023, the ILO said.

Uncertainty created by Covid-19 variants continues to weigh on the jobs market -- particularly in low- and lower-middle-income countries, the Geneva-based organization said Monday.

“We are well positioned to get there in the spring thanks to all the tools at our disposal: tests, very effective vaccines and the first treatments that can be taken at home.”

The Pfizer CEO -- whose company manufactures vaccines and Covid-19 treatments -- cautioned that evidence the omicron variant’s lower virulence does not mean the new coronavirus will disappear. “We’ve had so many surprises since the start of the pandemic,” he said. “We will probably have to live for years with a virus that’s very difficult to eradicate.”