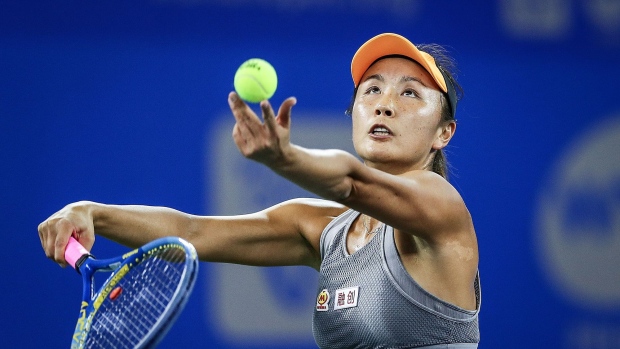 (Bloomberg) -- International Olympic Committee President Thomas Bach will meet Peng Shuai during the Beijing Games, the global sports organization said, in the latest effort to ease concerns about the Chinese tennis star at the center of a political storm.

The IOC and Peng have been in regular contact since the former Olympian’s video call with Bach in November and would meet during the Winter Games, a committee spokesperson said in an emailed statement Wednesday. Chinese authorities have been “very supportive” and have sought to ensure the meeting takes place despite strict Covid-19 measures to prevent contact between event participants and the community, the spokesperson said.

China has sought to tamp down concerns over Peng’s well-being ever since she posted a 1,500-character essay on social media in November alleging an affair with a retired top Communist Party official that was at times coercive. She disappeared from public view after the post, leading the White House, the Women’s Tennis Association and some of the sport’s biggest stars to express concern for her safety.

Peng has since appeared in public several times, denying in an interview with Singapore-based Chinese language Lianhe Zaobao newspaper last month that she had accused former Vice Premier Zhang Gaoli of sexual assault. Such appearances have failed to satisfy her supporters, with Australian Open attendees ejected last weekend for wearing T-shirts asking “Where is Peng Shuai?”

The IOC has been criticized for helping China’s damage-control effort to ensure a more successful Games. On Tuesday, Chinese President Xi Jinping meet with Bach in Beijing, in one of the few audiences that the Communist Party leader has granted to a foreign dignitary since the start of the pandemic.

The IOC had previously said Peng assured Bach in their 30-minute call in November that she was safe, and accepted his invitation to dinner during the Olympics. Peng has since told the IOC she was “looking forward” to the meeting, the committee spokesperson said Wednesday.