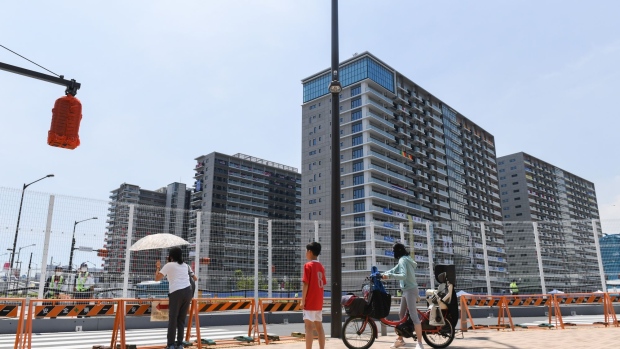 The Olympic and Paralympic Village for the Tokyo 2020 Games. , Bloomberg

(Bloomberg) -- The Tokyo Olympics is facing the first major test of its Covid protocols, after three people linked to the South African men’s soccer team tested positive for the coronavirus and put into jeopardy its match against Japan scheduled the day before the opening ceremony.

Two players and one video analyst from the South African side have tested positive, and 18 others from the delegation who had been in close contact are in isolation. South Africa now has to put together a squad of at least 13 people who can clear health protocols for Thursday’s match.

“We are there on the guillotine at the moment and we have to find a way to escape it,” South Africa coach David Notoane told a news conference, according to the nation’s public broadcaster SABC.

With soccer one of the most anticipated events for Japan, cancellation of the match even before the Olympic cauldron is lit will deal a further blow to the troubled games. And if South Africa fields a patchwork team, that would raise questions over whether the Olympics celebrates the best in competition when athletes are being sidelined due to the virus.

The South Africa Covid cases will also put the protocols set up under the 70-page so-called Playbook of virus-prevention measures for the Olympics under even closer scrutiny. According to the rules, those isolated after close contact with infected individuals can only compete if daily PCR tests turn up negative and they are cleared by medical and sports officials to play. This means that the South Africans will need a negative virus test within six hours of the 8 p.m. match time to take the field, Kyodo News reported.

The Japanese public has been skeptical about whether the Playbook’s measures will be enough to prevent the global sports spectacle from turning into a superspreader event, a survey this month showed. Nearly two-thirds of respondents to a poll from public broadcaster NHK said they weren’t convinced by government explanations for holding the games during a pandemic and about half had doubts about the administration’s virus-prevention measures, which include a ban on spectators at most events.

Another major health protocol is that athletes and officials must live and travel within a bubble to keep them isolated from the general public. However, positive tests found among those in the athletes’ village in Tokyo in recent days have stoked concern about whether the precautions are sufficient. As of Wednesday afternoon more than 70 people associated with the games have tested positive for Covid, according to organizers.

Athletes don’t need to be vaccinated to participate but they are required to get tested daily. Organizers have required a negative Covid test prior to arrival in Japan, and participants have been subject to a three-day quarantine after they land.

The Tokyo Games will be the first held without fans since the modern Olympic movement started in the late 19th century. The stakes are enormous for Japanese Prime Minister Yoshihide Suga, whose political fortunes are closely tied to the success of the games, and for the International Olympic Committee, which faces scrutiny on whether it may be putting the money that comes with broadcast rights ahead of public health.

In the corporate world, major sponsor Toyota Motor Corp. has distanced itself from the Olympics, after saying this week that it wouldn’t air television advertisements in Japan during the games and its president won’t attend the opening ceremony on concerns about holding the event during a pandemic. Executives from other sponsors including Fujitsu Ltd. and NEC Corp. are also skipping the ceremony.

Masayoshi Son, the billionaire founder of SoftBank Group Corp., has also criticized the push to hold the Olympics.