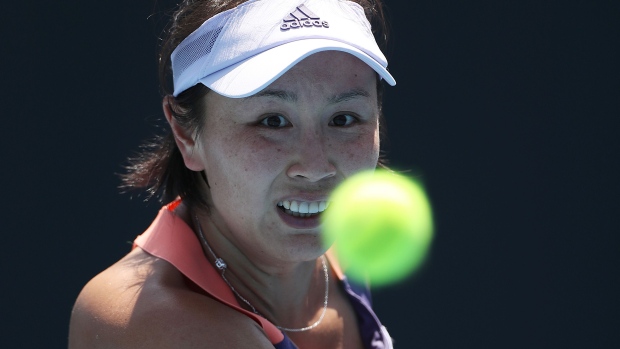 Peng Shuai of China during the 2020 Australian Open in Melbourne. ( , Getty Images

(Bloomberg) -- Long-time International Olympic Committee member Dick Pound has dismissed claims the organization vouched for the safety of Chinese tennis star Peng Shuai to avoid angering Beijing and credited it with being the first to contact her.

“Frankly, I think that’s a little silly and it’s not supported by the evidence,” Pound told Bloomberg TV on Tuesday.

“All kinds of people were trying to get in touch with her to make sure that she was alive and healthy and not in captivity,” he added. “The only organization in the world that’s been able to establish that is the IOC. I thought it was a very good start and everyone should be reassured she’s fine.”

Peng disappeared from the public eye earlier this month after writing a 1,500-character social media post that alleged a decade-long sexual affair with retired senior Chinese official Zhang Gaoli. That essay was immediately removed from the internet and attempts by the media and the Women’s Tennis Association to contact her were unsuccessful.

After tennis greats including Serena Williams and Novak Djokovic joined the growing chorus of international figures demanding to know Peng’s whereabouts, Chinese state media posted to Twitter a series of videos and pictures of Peng at home, out with friends and at a tennis event.

Those clips prompted more questions about Peng’s well-being because no one outside China had been able to contact her. The tennis player, who once won the French Open and Wimbledon as part of a doubles team, then held a 30-minute call with the IOC, assuring its President Thomas Bach she was safe.

Still, the IOC --  which has hundreds of millions dollars at stake in the Beijing Winter Games starting in February -- didn’t address key concerns about Peng, including why others can’t get in touch with her and why she hasn’t posted to her verified Weibo account.

Human Rights Watch was later critical of the IOC’s call with Peng. “The IOC appears to prize its relationship with a major human rights violator over the rights and safety of Olympic athletes,” said Yaqiu Wang, senior China researcher at the organization.