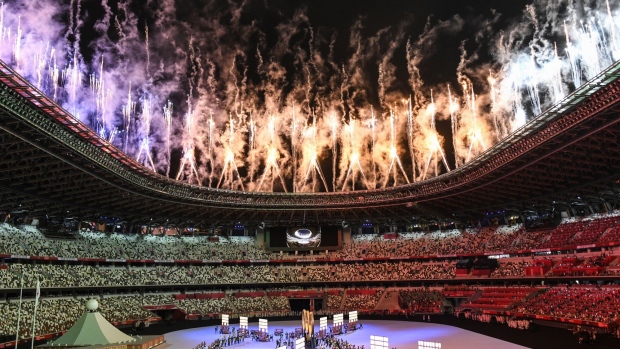 (Bloomberg) -- Since the opening ceremony of the Olympics last week, NBC has been busy negotiating with anxious advertisers, offering ways to make up for the games’ steep drop in viewers, people familiar with the matter say.

Haggling over “make-goods” isn’t unusual in TV. But the discussions show that NBC’s ambitious Olympics effort from Tokyo is drawing a smaller audience than the broadcaster or advertisers expected. With the coverage nearing its halfway point, average nightly viewership through Tuesday was down 42% from the 2016 Summer Games across all of NBC’s outlets.

A decline through the second week threatens to eat into the revenue that NBCUniversal counts on to cover expenses and turn a profit from the games. The company, part of Comcast Corp., sold more than $1.25 billion in commercials for this year’s Olympics, a record. It’s paying about $1.1 billion for the broadcast rights.

“It’s disappointing to see how far the viewership is off from five years ago but it’s not entirely surprising,” said Dave Campanelli, chief investment officer at the ad buying company Horizon Media.

The decline from the 2016 Games in Rio de Janeiro partly reflects the long-running drop in traditional TV audiences, which have been lured away by streaming. And while sports ratings have bounced back this year from 2020, many events are down from pre-pandemic levels.

But NBC has faced other challenges in attracting Olympics viewers this year, from empty stadiums caused by pandemic restrictions, to Tokyo’s 13-hour time difference with the U.S. East Coast, to high-profile athletes dropping out of the competition.

On July 27, NBC faced a fresh setback when gymnast Simone Biles, the biggest star of Team USA, withdrew from the competition, citing mental stress. The well-known tennis star Noami Osaka lost in an early round. Some athletes withdrew before the games after receiving positive Covid-19 tests.

Meanwhile, some fans have said on social media they are confused about where to find the programming, which airs across two broadcast channels, six cable channels and multiple digital platforms.

While the ratings are down from 2016, what matters most to advertisers is what NBC promised them. Ad deals are based on either the number of viewers or “brand lift,” a term for how audiences perceive a brand compared with competitors. Each deal with advertisers is different.

“We know our platform will deliver for advertisers in delivery and impact,” Mark Marshall, NBCUniversal’s president of advertising and partnerships, said in a statement. “Our teams are speaking to our partners every single day to ensure we help them achieve their goals throughout the games.”

Networks plan for the possibility of make-goods. NBC set aside extra advertising inventory before the Olympics began in case ratings were lower than expected and the company was forced to give sponsors additional commercial time to meet its obligations.

But that also means NBC misses out on the revenue those extra minutes might have generated if the ratings were strong and advertisers wanted to reach more viewers.

“Does it impact the amount of revenue NBC can generate? Almost certainly,” said Brian Wieser, global president of business intelligence at GroupM, an arm of the big advertising company WPP Plc.

But a steep decline in ratings from the last Summer Olympics doesn’t necessarily mean NBC’s broadcast is a bust. In 2016, the ratings fell 9% and NBC still turned a $250 million profit from the games, a record.

In a call with investors Thursday, NBCUniversal Chief Executive Officer Jeff Shell said he expects to turn a profit from the games.

And NBCUniversal has other metrics of success besides TV viewers. The Olympics are also on Peacock, its year-old streaming service.

The company hasn’t yet said how many people signed up for Peacock since the games began. But overall streaming minutes on Peacock and other digital platforms are up 24% from 2016 through Sunday. On July 28, Peacock was in the Top 10 on Apple’s chart of most popular free apps.

The network still has time to make up for the early ratings decline. The Olympics run until Aug. 8.