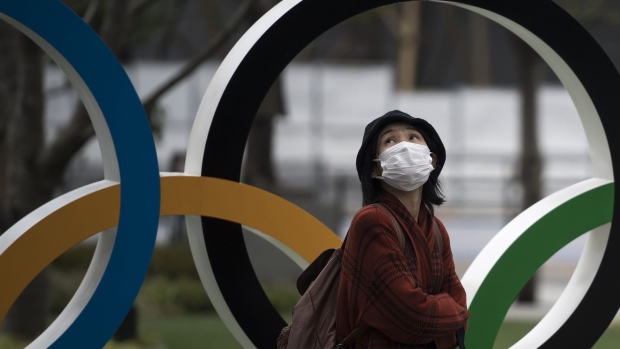 TOKYO, JAPAN - FEBRUARY 26: A woman wearing a face mask walks past the Olympic rings in front of the new National Stadium, the main stadium for the upcoming Tokyo 2020 Olympic and Paralympic Games, on February 26, 2020 in Tokyo, Japan. Concerns that the Tokyo Olympics may be postponed or cancelled are increasing as Japan confirms 862 cases of Coronavirus (COVID-19) and as some professional sporting contests are being called off or rescheduled and some major Japanese corporations ask for people to work from home. (Photo by Tomohiro Ohsumi/Getty Images) , Photographer: Tomohiro Ohsumi/Getty Images AsiaPac

(Bloomberg) -- The coronavirus crisis is making the 2020 Tokyo Olympics less likely by the day, according to a former Team USA executive.

“A day ago or a week ago, I might have said 50/50 chance, but I think we’re zooming toward 20/80, and really 1/99,” Rick Burton, a sports-management professor at Syracuse University and the former chief marketing officer of the U.S. Olympic Committee, said on the Bloomberg Business of Sports podcast. “As each day goes by, and more and more people unfortunately succumb to this illness, it gets harder and harder to imagine that the Olympics can take place.”

Though organizers insist that the games will go on as planned, their official tone related to the coronavirus pandemic has changed. After weeks of refusing to acknowledge that the games could be disrupted, the International Olympic Committee’s executive board said this week that the virus is an “unprecedented situation” that is changing daily.

The drumbeat to postpone or cancel the games is growing louder. Earlier this week, an IOC member said that holding the games as scheduled would be “insensitive and irresponsible,” the first public comments of that nature from the group that manages the Olympics. The head of the Spanish Olympic committee also said the event should be postponed.

The IOC certainly has a financial stake in the games happening. Broadcasters and sponsors pay billions of dollars every four years for exclusive rights around the Olympics. The total budget for the games, including infrastructure upgrades around Japan, is more than $22 billion.

The problem for the IOC and local organizers, however, runs much deeper than whether the games themselves can be held July 24 to Aug. 9 in Tokyo. Dozens of qualifying events around the globe have been canceled or postponed, and many athletes are either in quarantine or trying to find new training options because their schools and facilities have been shut down.

“For an event that’s scheduled to take place in less than 180 days, you wouldn’t see world-quality competition, you’d see people who are rusty,” Burton said. “The challenge for the IOC or the Tokyo organizing committee is, ‘Are we willing to put on second-rate games in order to deliver the games, or would we all be smart to take a cancellation and put this into 2021?’”